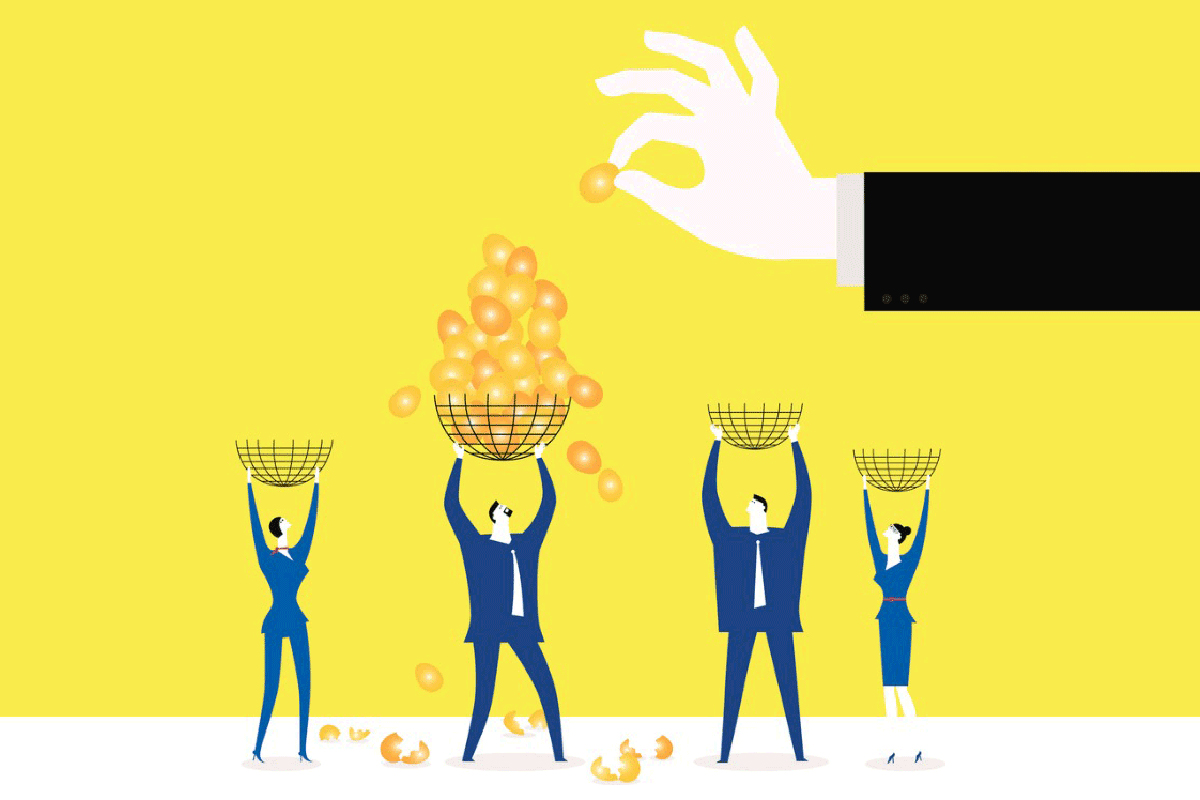 PLANADVISER recently hosted a one-day digital learning seminar, “Building Your Practice in 2021,” that aimed to speak to the facts of this year and to frankly and unabashedly address the persistent and pernicious problem of wealth inequality in the United States.

At the seminar, Yakov Feygin, associate director of the Future of Capitalism Program at the Berggruen Institute, gave a keynote presentation about his recent research work. Feygin holds a Ph.D. from the University of Pennsylvania and has previously been a fellow in the History and Policy Program at the Harvard University Kennedy School of Government.

Feygin knows a lot about the past, present and future of inequality, and he spoke to PLANADVISER’s readership about the role they can play in helping to solve what some see as issues of inequality that are inherent to capitalistic societies. But, as Feygin emphasized, the current level of wealth inequality in the U.S. is not an intrinsic characteristic of a market-based economy. It is, rather, largely the result of the imbalanced monetary and fiscal regime that has existed in the nation since short periods of high inflation seen in the mid-1970s and the early 1980s, he said.

“My work is focused on understanding the connection between contemporary inequality and the types of monetary and fiscal regimes we have built in the modern U.S.,” Feygin said. “I work to understand how we got to the current regime, how it has been politically sustainable despite its flaws and, most importantly, how it is changing, especially during the pandemic. I believe the pandemic is a breaking point and a test case for a new kind of emerging fiscal regime that can improve the overall wealth distribution.”

To put it directly, Feygin’s belief is that the U.S. has relied far too much on monetary policy over the past several decades. This is to say, every time the economy has neared full employment, the Federal Reserve has raised interest rates simply to avoid the possibility of inflation. This has in turn cooled off the economy and prevented the sustainment of the types of tight labor markets that, in Feygin’s view, can do a lot to help the lower and middle classes improve their economic standing through securing higher incomes from work.

The Two Types of Inequality

Feygin explained that his work is based in the understanding that there are two types of inequality: wealth inequality and income inequality.

“This might seem a little obvious, but there are really two meaningfully different kinds of inequality to think about,” he said. “On the one hand, there is wealth inequality—often expressed academically as inequality in the ownership of the stock of wealth. This is quite stark. In our data, which is based on what the Federal Reserve publishes, we can see that 50% of the overall net stock of assets is owned by the top 1%. The next 22% of the total is owned by the next 40% of income earners.”

The wealth inequality picture gets even starker if one breaks it down by race. The average Black family owns $23,000 in net worth, according to Feygin’s data, while the average white family owns $184,000. Troublingly, the racial gap holds across education levels.

“This last fact really helps to show us that wealth in the U.S. is often an intergenerational thing,” Feygin suggested.

The other type of inequality is income inequality, which is tied to income from salaries and other benefits. The income distribution is also extremely skewed, compounded by the fact that wages have only gone up 8.7% at the median since 1973, while productivity has gone up 72.2%, according to federal data.

“The mean wage has gone up 42.5%, which shows how there are some very heavy outliers in terms of income earners—yet another sign of worsening inequality,” Feygin said. “The real question is, if we are policymakers or financial market practitioners, what should we do? Which of these inequalities should we address first?”

Feygin explained that some of his peers in the research world argue that wealth inequality is a lot harder to define and address in practice, though he doesn’t necessarily agree.

“They argue that the value of wealth is dependent on interest rates and market values, and because wealth fluctuates this way, it is harder to measure and evaluate as a policy matter,” Feygin said. “Wealth can be illiquid in ways that makes it hard to know how to factor existing wealth into decisions about welfare measures, as well. Furthermore, a lot of currently unwealthy people are also people with very high incomes and high lifetime earnings potentials. Think about young professionals just out of graduate school with a lot of student debt. They have high lifetime earning potentials, but they have a very low net worth, even compared to someone who may be lower-income but who has lower amounts of current debt.”

For policymakers, Feygin emphasized, the important point is to acknowledge there are systemic reasons why our society has become much more unequal according to both the parameters of wealth ownership and income.

“My argument is that the current state of affairs is a phenomenon of a series of political decisions that have unfolded over several decades since the inflationary periods I have mentioned,” he said. “We can and should create policies that can effectively reduce both types of inequality.”

Feygin said many economists have devised models to suggest that high amounts of wealth inequality are endogenous to a capitalist economy. The models are subtle, but they center on a general rule expressing that the rate of profit extracted by asset owners will always be higher than the economy’s overall growth rate, and so wealth inequality will always increase under capitalism.

“This view can be understood as a supply-side or a savings-side view of wealth, which leads to policy prescriptions such as a global wealth tax,” Feygin said. “That’s not a bad solution as far as it goes, but I think there is more to say here.”

Feygin said his personal view is closer to scholars who focus on the fact that the collective stock of wealth in a society is highly influenced by the current interest rates and the current valuations of its financial markets.

“We argue that the response to the inflation of the 1970s has put our economy on an unfair bias, one that rewards the accumulation of assets over the importance of growing incomes from work,” he said. “We have for too long been viewing the risk of inflation as being higher and more dangerous than the potential benefits of fostering greater growth. This has to change.”

The Role of Inflation

Feygin said his view that fiscal policy should be relied on more than monetary policy to help address inequality is also tied to his alternative view of inflation.

“I argue that we should now accept that the standard story that certain monetary aggregates can and do predict rising inflation is just wrong,” Feygin said. “In reality, we have to accept that we don’t know directly where the next source of inflation could be. Historically, you can see that, yes, inflation spikes after an increase in certain monetary aggregates occurs, but we also have to see that those increases do not themselves predict inflationary episodes. This is obvious, in part, because we can clearly see there have been past increases in the aggregates that did not end in inflation.”

Until recently, in Feygin’s view, the policy playbook used by the Federal Reserve was created in response to the “unique and perfect storm” that drove the high inflation in certain parts of the 1970s.

“The 1970s saw very rapidly growing wages due mainly to the boom caused by the Vietnam War,” he said. “The very strong wage growth came at a time when investment in industrial capacity simply could not go up to meet the new demand that these new earnings created. That was for two reasons. The first was the oil shock, which made it harder for companies to juice up their capacity as fast as they would have wanted to. The second reason was because of other overhead costs being extremely high as a result of the Cold War and the related demand from the military for certain kinds of input goods and services. This all made consumer-oriented industries, which drive core consumer inflation, unable to expand rapidly enough to prevent inflation.”

Feygin argued that, in subsequently trying to avoid inflationary spikes by dialing up interest rates any time the labor markets have tightened, the U.S. has effectively eliminated any ability of its laborers to negotiate for greater incomes. Thus, income inequality has gotten worse and worse over the decades.

“Relatedly, we have over-relied on monetary policy instead of fiscal policy and, because of that, instead of dealing with downturns by fostering new industries and allowing for tighter labor markets, we have simply played again and again with interest rates and hoped that the markets would themselves get us back to full employment,” Feygin said. “Part of why this untenable situation has persisted for so long is that housing has been an important asset for the middle class. Before the Great Recession, this helped quite a bit, but after the Great Recession, it hasn’t been enough, especially for less wealthy families.”

The COVID Crisis as a Societal Opportunity

Feygin concluded his presentation by suggesting the U.S. is at a critical crossroads when it comes to solving inequality.

“Why do I say we are at a crossroads? Well, the COVID-19 pandemic has allowed the U.S. to rebuild its welfare state basically overnight,” he said. “We have embraced generous unemployment insurance, direct cash payments to families and a lot of other forms of quiet fiscal support to bolster household finances. We’ve seen the results already in the jump in the savings rates and the growth of asset ownership.”

Feygin said the new commitment to stimulus and support is all due to a different view of inflation being embraced by the Federal Reserve.

“We are really rethinking inflation under the leadership of Fed Chairman Jerome Powell,” Feygin said. “Powell’s argument is that 2% inflation can be seen as a loose alarm bell—not as the policy trigger it has been in the past. The Federal Reserve has declared its primary goal is maintaining full employment, with the secondary goal being to maintain an average 2% rate of inflation—not a hard 2% current inflation figure. This is a flip of the switch that is very meaningful. Employment is no longer being viewed as a variable to control inflation.”

Feygin said the Federal Reserve’s new policy is the right one, suggesting there is no good scientific reason to say 2% is an optimal rate of inflation. He said the policy also reflects the fact that promoting full employment is itself an important societal goal that may merit periods of higher sustained inflation than what might have been viewed as acceptable by policymakers in the past.

“In my view, I think we could live with even 3% or 4% inflation, for example,” Feygin said. “There is a revolution in thought that has accepted that monetary policy isn’t the only game in town anymore. What we really need to solve our big challenges is fiscal policy—large amounts of government investment that is driven by debt and/or tax revenues. This is what we are seeing so far under the Biden administration. I would say we are entering a new world that represents a real opportunity for progress on inequality.”