The average balance is up from $80,600 at the end of the second quarter 2013, Fidelity says. The figure includes all employees participating in workplace retirement plans served by Fidelity, regardless of career stage. For those employees who have been active in a workplace 401(k) retirement plan for 10 years or longer, average balances rose 15% per year over the past decade to reach $246,200, according to a quarterly Fidelity analysis.

“I actually went back into the data and looked at the average percent equity our participants are holding, and right now it’s up at 73% of assets, which includes equity assets held in professionally managed options like target-date funds,” Thompson tells PLANADVISER. “Going back to 2010, they were only holding 64% in equity. This suggests to me that it’s likely many people are overweight on equities without realizing it.”

Thompson says the more distressing fact she pulled from the data is this: Of the approximately 63% of workplace retirement investors that Fidelity classifies as “do-it-yourself” investors—i.e., those who create and manage their own portfolios rather than buy into a managed account or target-date option—many have not checked on their accounts even once in the last two years.

“They haven’t gone in to do a fund exchange or reset their asset allocation or do anything,” Thompson says. “With the markets rising pretty steadily over the last two years, again many are overweight in equities without realizing it. Those people doing it on their own, they need to take responsibility for rebalancing and taking charge of their investments, or they could suffer more than they have to should the market experience a correction. We are strongly recommending that folks go in and make sure they’re only taking on as much risk as they are comfortable with in case the markets fall.”

Individual retirement account (IRA) investors experienced similar growth in the last 12 months, Fidelity says. The average balance of Fidelity IRAs now stands at a record high $92,600, also nearly a 15% increase over the average balance from a year ago.

Thompson points to strong stock market gains as the principal factor underlying the record-setting balance growth. Indeed, the analysis shows as much as 77% of the one-year 401(k) average balance increase was due to the equity markets. Just 23% of the growth, in turn, was based on combined employee and employer contributions. 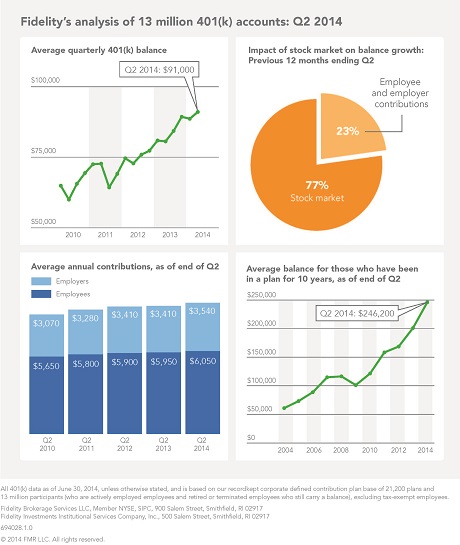 But Thompson is quick to point out that this is out of the ordinary.

“Looking at contributions over the last 10 year period, the data tells a much different story,” she explains. “We see that since 2004, 55% of the net account growth was due to the markets, and 45% was due to contributions. We don’t necessarily have the data needed to look back farther, but it’s certainly possible that over a longer term the impact of contributions will be equal to or even outweigh the impact of investment returns.”

Thompson says this fact “really highlights the role the markets have played in the last year, but over the long term, it’s much more equal between the markets and contributions.” Therefore it’s critical for plan sponsors and advisers to remind participants that it’s not just the investment decisions or the asset allocations underlying growth and successful outcomes, she continues.

“Long-term success is just as much about maintaining high contribution levels as well,” she adds. “If you look at periods like 2008 and 2009, when the markets were not doing well, it was zero-return environment at best for many investors. Any growth in account balances during that time was driven by contributions.”

Interestingly, Thompson says, Fidelity’s data shows employee contribution levels do not respond significantly to market crashes or surges. Contributions by employees to 401(k)s accounts averaged $6,050 over the past year, with an average of $3,540 being contributed in the form of employer matches. Both figures are rising, Thompson says, albeit slowly.

“That is actually encouraging to us,” she says. “Employees seem to maintain their contributions regardless of what the markets are doing, and again that’s critical for long-term success. As the markets are going down, as a long-term investor you can buy in at a lower price and then later on reap the benefits of dollar cost averaging and compounding. If you’re only going to contribute when the market is high, you’re chasing performance. Especially with retirement being a 40 year proposition, potentially. You need to maintain some equity allocation and you need to keep contributing even in the down markets.”