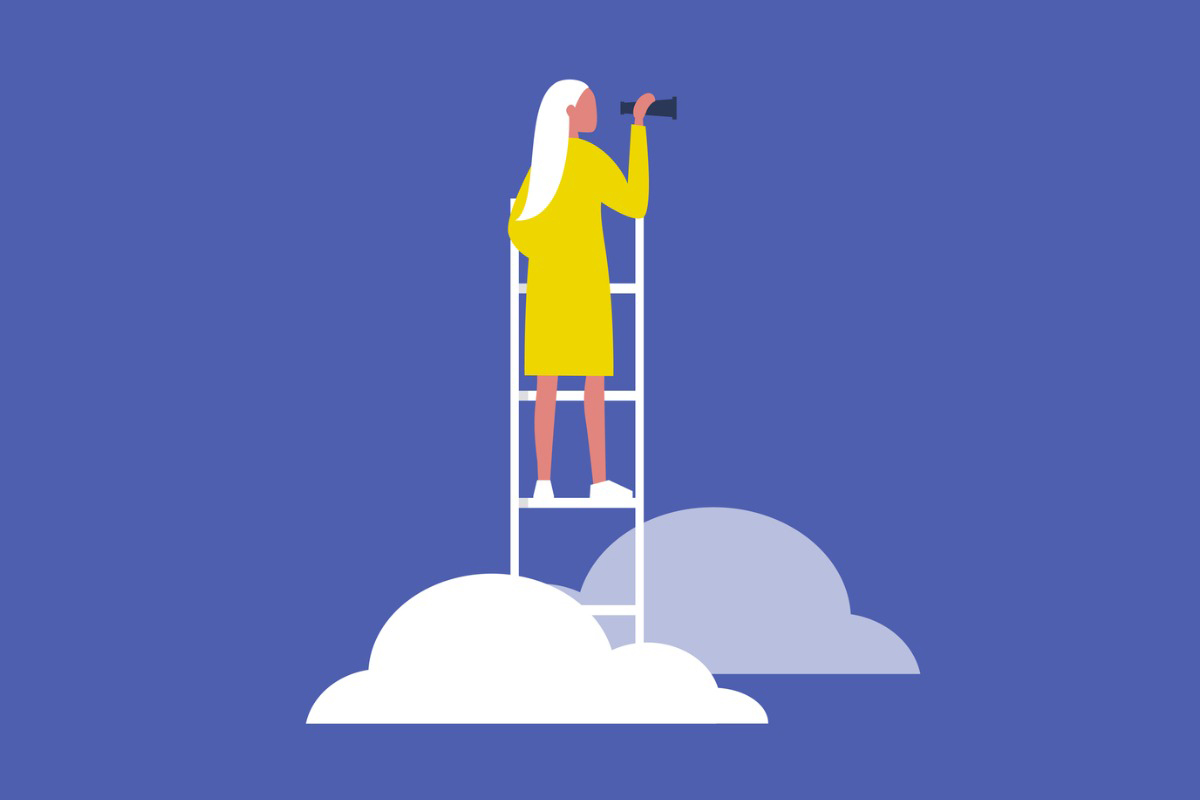 Recordkeeper growth through consolidation has come with a decrease in the share of proprietary investment options the giants of the industry have to offer plan sponsors, according to new research from ISS Market Intelligence.

Recordkeepers with their own asset management divisions have been buying up retirement divisions at a rapid pace over the past decade, significantly boosting the participant pool that they can offer to default into their own investment options. The drop in retirement recordkeepers from about 400 to just 150 over the past decade has led to opinions that consolidation would also reduce third-party investment options available to DC plans.

But researchers from ISS Market Intelligence see a silver lining in the trend, with the share of recordkeeper-owned investment options dropping as the firms focus on integrating plan sponsors and participants to take advantage of their new scale.

“The drop in proprietary share shows that while there is consolidation in certain areas of the market, it does not translate to all other parts of retirement,” said Alan Hess, ISS associate vice president for U.S. fund research, in an emailed response. “Firms that offer both recordkeeping and asset management services may face limits on translating dominance in one market to another, which means that third-party managers can still hope to find space on consolidated platforms.”

For the 14 recordkeepers that also have asset management divisions, the median proprietary share has fallen by nearly half over the last decade, from a high of 45.7% in 2009 to 24.8% in 2020, according to ISS Market Intelligence. That compares to total plan assets under administration jumping from $1.5 trillion to $4.7 trillion. 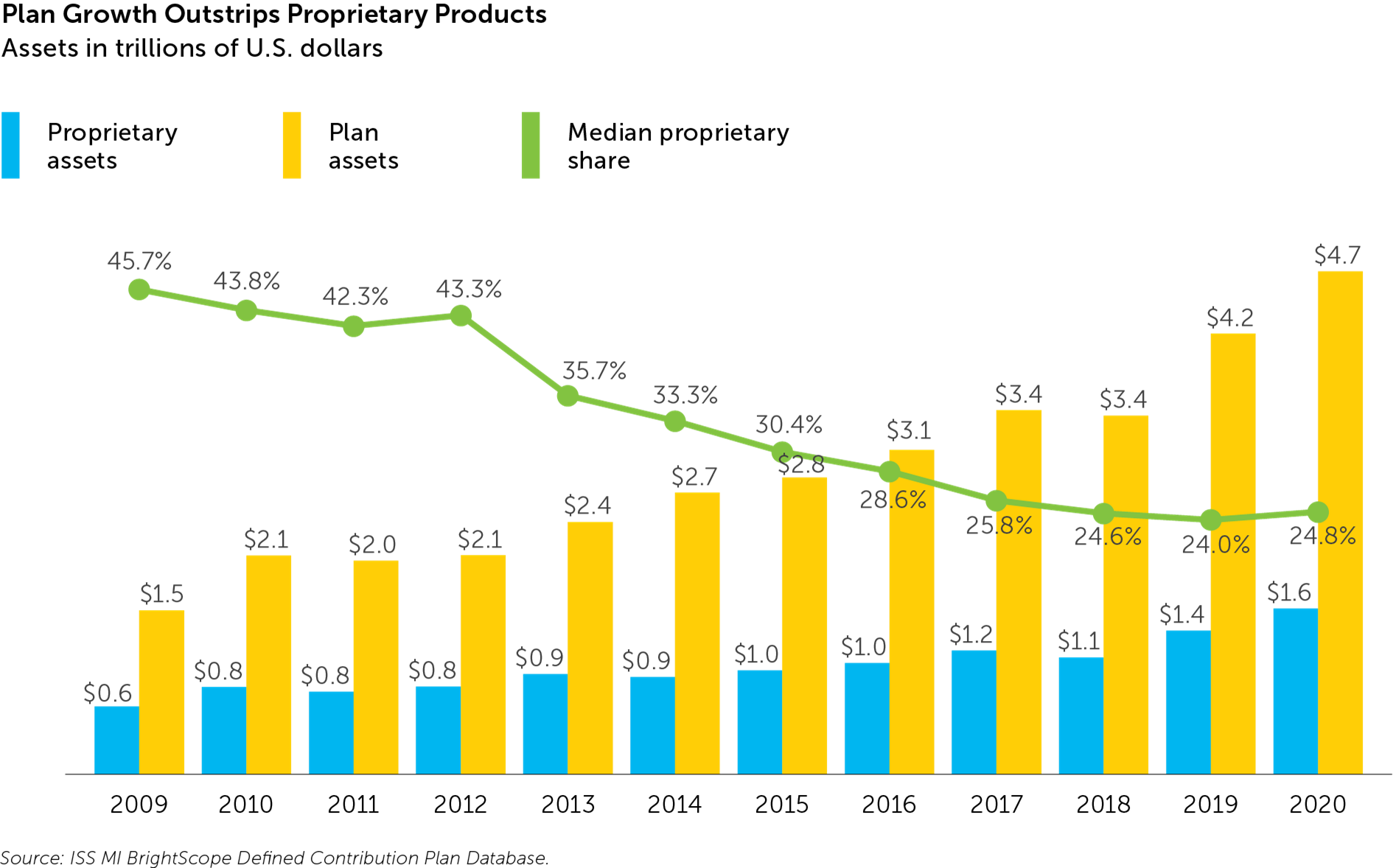 The acquisitions made by these firms increased total plan assets but did not add asset management divisions, according to the report. So while some of the investment managers may still be engaged with the retirement plans, they are not owned by the acquirer.

“These acquisitions help increase total plan assets, but do not include the rest of the firm’s asset management business and cause prop assets to represent a smaller portion of the new total,” ISS said in the report. “Recordkeepers with proprietary product may be able to influence plan design at the initial stages but have less room to promote such funds when taking over existing business.

Asset managers who may initially see consolidation as a threat can take the opportunity to approach retirement plan advisers, recordkeepers or third-party administrators, says researcher Hess.

“Investment option turnover might be greater among retirement plans than some asset managers would prefer, but it is a more stable market compared to the retail space, which is reflected both in the steadiness of contributions and the careful decisions that need to go into crafting and revamping investment offerings,” Hess said.

The relationship, however, has been scrutinized by regulators and faced litigation on funds managed by the platform owner and how well they do or do not match to other options, the report says.

On November 9, MassMutual faced just such a lawsuit by a participant accusing the Springfield, Massachusetts-based company of putting in the plan its own offerings that were not performing as well as other options. The complaint alleges part of the strategy went toward making them more attractive for an acquisition by Empower Retirement in 2020.

Empower, now the owner of MassMutual’s retirement business, did not immediately respond to comment on the lawsuit.

Overall, the gain in scale and market share has been the key motivator for recordkeepers, Hess said. Empower, which has accounted for much of the acquisition activity in recent years, has a very low share of proprietary products on its platform.

Even so, keeping participants in-house for asset management products would serve as an additional source of revenue for consolidators and keep them from flowing out to competitors, Hess said.

The firms that have the largest proprietary share of offerings are also some of the biggest firms in the general asset manager industry, according to the report. These firms include The Vanguard Group, Inc., with a leading position in mutual funds and exchange-traded funds, as well as Capital Group, which owns American Funds.

« A Closer Look at the Emergency Savings Provisions in SECURE 2.0