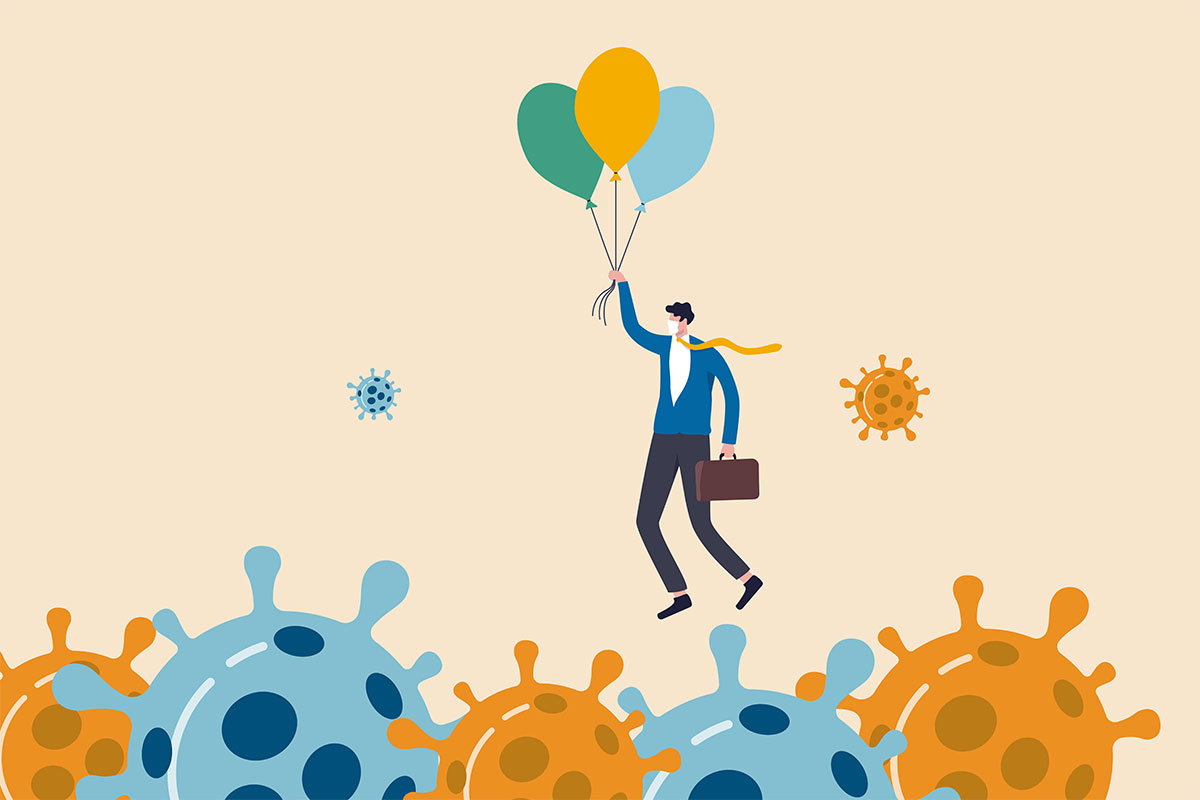 Experts say the stock market has been lifted and kept afloat by trillions of dollars in relief from the federal government, among other things, but they also warned there could be more rocky times ahead.

“What is driving the market rebound are companies that would benefit from an extended period of social distancing,” said Crit Thomas, global market strategist at Touchstone Investments, during a recent webinar hosted by JConnelly. “Certainly, there are also parts of the market that are getting pulled forward by aggressive monetary and fiscal stimulus.”

Other speakers agreed that the fiscal stimulus is largely the reason why the market has recovered so strongly from its deep March lows.

Eddy Augsten, managing director at Concurrent Advisors, said, “If we just go back to the bottom and the lows in March, it was quite evident that when the fiscal and monetary stimulus policy came through, there was almost nowhere to go but up at that point.” He said stocks have also been buoyed by a perceived ability to control the coronavirus, the fact that governments have been opening their economies and the hope of a vaccine in early 2021.

Saumen Chattopadhyay, chief investment officer of Carson Group, said that if one looks at price-to-earnings (P/E) data, the market is overvalued.

Chattopadhyay said that after dropping by 34% in February and March, the S&P has since recovered 30% of its losses. However, Mark Travis, CEO of Intrepid Capital, said second-quarter earnings reports could reverse the run-up. “I would expect earnings to be fairly abysmal, down 40% or so from the prior period,” Travis said.

Augsten added: “Post July, I agree with Mark, It becomes about earnings and earnings expectations.”

Chattopadhyay noted that investment managers are wondering whether the recovery will be V-shaped, or if the global economy could suffer a second setback, making this a W-shaped recession. He said the companies whose stocks are performing well have a “resilience to the pandemic,” particularly technology and health care companies.

“The tech sector is up about 17%, and the financials are down about 24%,” he said. “There is definitely an imbalance between where the economy and the market is going, which poses the question, is this really sustainable? Are your portfolio allocation and your risk allocation aligned?”

Augsten agreed that valuations are frothy and said it is “probably wise to take some risk off the table in terms of your equities.”

“We have been taking some profits off the table from equities,” Augsten said. “We’re comfortable holding cash, to some degree. We’ve also been looking at other markets where you could pick up some equity beta, for example in the credit markets. That could include high high-yield credit, asset-backed securities [ABS], preferred securities, market-neutral strategies or event-driven strategies, for example.”

Travis said that, were one to use Chattopadhyay’s valuation for where P/E figures should be, the S&P 500 should actually be at 1,800. He said his firm has always concentrated on stocks whose companies have “free cash flow, strong balance sheets and a rational business valuation.”

Augsten said he thinks small caps are “very attractive,” as long as they are selected by an active manager, “because there are a lot of companies in the Russell 2000 that just don’t have any earnings.”

Chattopadhyay also warned that he expects global gross domestic product (GDP) to decline 5% this year, and that the U.S. could face a “deep recession.” “That’s with the assumption that we are not going to have a second wave of the virus,” he added. “No one knows what the end game is with COVID-19.”

Speaking during a different webinar hosted by Legg Mason, Jeffrey Schulze, investment strategist at ClearBridge Investments, warned that he believes a market pullback is inevitable. The question, he said, is, “How big and when is it going to come?”

Tim Wang, head of investment research at Clarion Partners, said that in spite of the recent resurgence in coronavirus cases, the death rate has been decreasing. “Those in the vulnerable population are protecting themselves. This suggests that COVID-19 is not seasonable, which may slow down the recovery to a U-shape,” Wang said, adding that he is optimistic the nation will not have to endure a second massive lockdown.

But even with that in mind, John Bellows, portfolio manager at Western Asset, said the S&P 500 could move up and down by 2% every day for the next six months.  “We are in a very uncertain time,” he said.

Bellows also said the coronavirus will leave a “legacy where the level of economic activity is almost certain to be lower post-COVID.”

“GDP will likely be down by 5% to 6%, which means that there is a trillion dollars of economic activity that isn’t going to come back,” he said.