In the ferocious pursuit of retirement security, government legislators and retirement industry leaders have set their sights on increasing the number of retirement plans that are available through small businesses. It’s a commendable quest. According to the U.S. Small Business Administration’s Office of Advocacy, almost one-half of American workers—about 59 million people—are employed by 30 million small businesses in the United States. At last count, Bureau of Labor Statistics data shows defined contribution plans, such as 401(k)-style plans, were available to 47% of workers in small businesses, while access to defined benefit plans, like pension plans, was far lower, at 7%.

There is a clear knowledge gap among small employers. Many (66%) thought workplace retirement plans were too expensive, and as a result, 45% of those employers have not researched the cost of any type of retirement plan.

The majority of decisionmakers at small businesses who had investigated plan sponsorship only considered 401(k) plans, which tend to have higher costs than other plan options, like Simplified Employee Pension (SEP) IRAs, Savings Incentive Match Plans for Employees (SIMPLE) IRAs, or Payroll Deduction IRAs. Only two-in-ten had sought information about SIMPLEs, SEPs, Payroll Deduction IRAs or other types of plans designed specifically for smaller businesses, which tend to have lower costs than 401(k) plans and are easier to administer.

Instead of closing the knowledge gap, state and federal governments and retirement industry leaders have focused on expanding the types of plans available and loosening the rules around existing plan structures in order to increase access. The federal government has introduced legislation that will, among other things, modify multiple employer plans (MEPs). State governments are also pursuing state-sponsored IRAs. Let’s look more closely at these opportunities.

During 2019, the Setting Every Community Up for Retirement Enhancement (SECURE) Act has been progressing its way through Congress. The legislation’s modified MEP is technically called a pooled employer plan (PEP). If the legislation passes, PEPs will allow employees of unrelated private-sector employers to participate in a single retirement plan.

Shared plans help reduce plan costs. MEPs typically cost less than traditional 401(k) plans, although that doesn’t make them inexpensive. Lower-priced 401(k) options have become available, so PEPs will need to be priced competitively to penetrate the small business market. The legislation sweetens the deal for employers by offering tax incentives for businesses opening new plans and for businesses with plans that add auto-enrollment.

PEPs also may reduce the complexity of day-to-day plan administration. The SECURE Act addresses a major headache associated with MEPs by amending Internal Revenue Service Codes to eliminate the ‘One Bad Apple’ rule, which asserts that if one employer violates plan qualification rules, the entire MEP may be disqualified.

Some in the retirement industry believe small business owners will embrace PEPs, while others remain skeptical. Even if PEPs were to double the number of employers with 401(k) plans in the U.S., that would only take us to about 1.1 million businesses offering them.

While PEPs should incrementally lower the cost of entry into the 401(k) market for some small businesses, they may remain too expensive for others. Only 2% of small business decisionmakers told Millennium Trust that they would be willing to pay an adviser more than $1,000.

With that in mind, the retirement industry may be forced to consider that while 401(k) expansion is certainly a solution to the coverage issue, it is only one piece of the solution.

A number of states, including California, Illinois, New Jersey and Oregon, have introduced government-run savings programs for private sector workers. With differences in their specific approaches, the programs generally require businesses of a certain size that do not have retirement plans to automatically enroll employees in a state-sponsored retirement account.

The cost picture for state-run IRAs is mixed. One the one hand, there is no fee for employers to participate in the handful of state programs that are currently in place. That fact could make these programs attractive to employers who want to offer a plan at no direct cost to their business, and research suggests that may be a large group. According to the 2018 Millennium Trust Small Business Retirement Survey, 86% of employers say that a no-cost plan would be more attractive to their business. Seventy percent said they would likely consider offering a no-cost plan within the next two years.

Conversely, if employers do not want to participate in a state program, they must sponsor a plan via another avenue or pay a penalty for non-compliance. This quasi “tax” may help explain why most small businesses aren’t really interested in a government-run program. 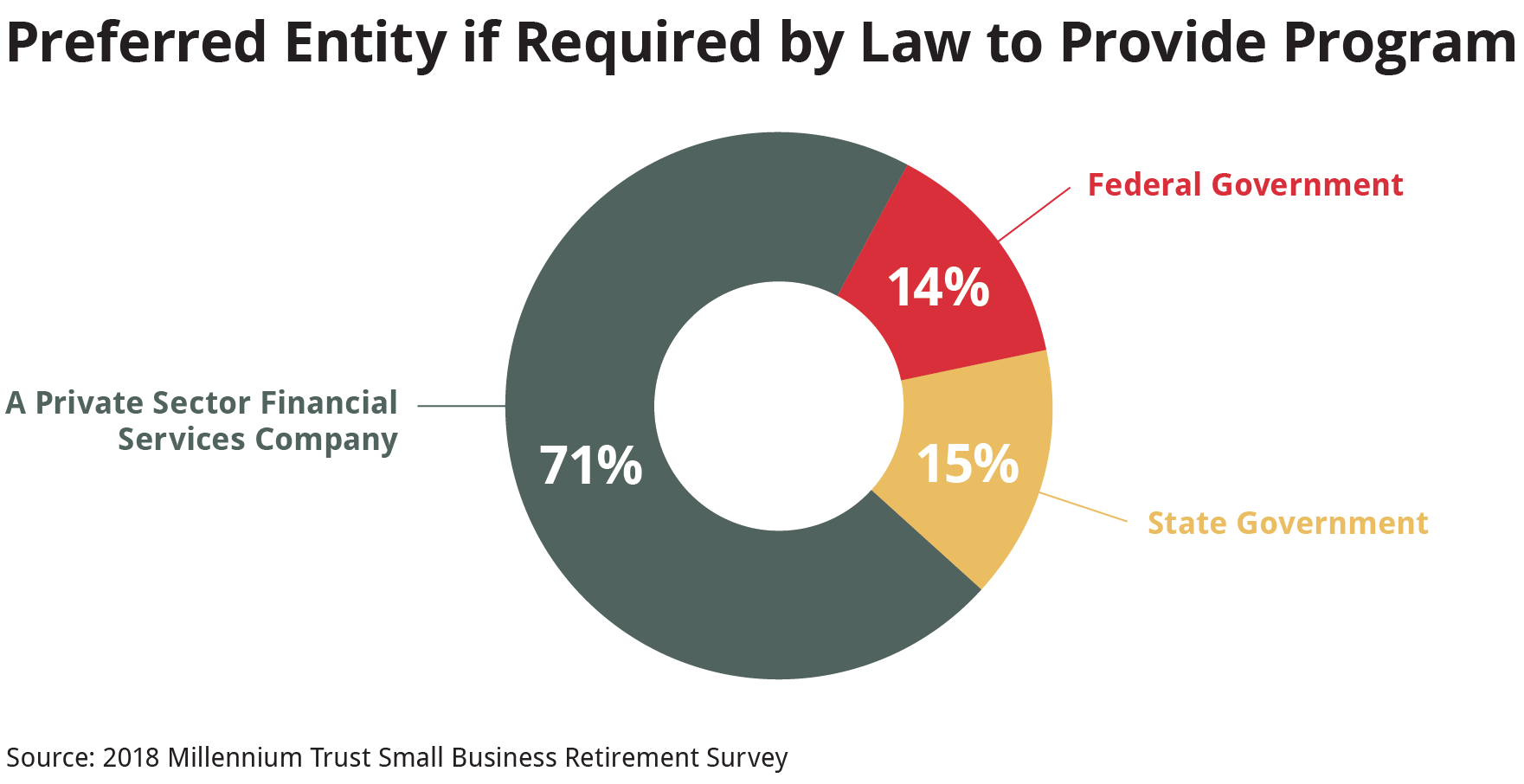 Nearly three-fourths (71%) of respondents to the Millennium Trust survey said they would prefer their plan be administered by a private sector financial services company if they were required by law to provide a retirement savings option to their employees—compared to just 15% support for a state government and 14% for a federal government offering.

Those numbers are supported by a recent SPARK Institute survey conducted by Cerulli, which found that 53% of small businesses don’t have confidence in their state government’s ability to run a retirement program.

So, state-run offerings may check the boxes for cost and ease of administration for most small employers, but they are unlikely to be trusted by those making the decision. As with PEPs, state-IRAs appear to be another part of the solution, but far from a panacea.

Finally, it is critical to ask, what good is a workplace retirement savings option if you don’t have a workplace?

While the retirement industry and our legislative bodies have spent years focusing on increasing access to retirement savings through the workplace, the definition of workplace has shifted beneath our collective feet.

Freelancers, the self-employed and contract workers are a rapidly growing segment of the economy. Estimates suggest that currently, some 18% of American adults are part-time employees or independent contract workers. According to some estimates, as many as 40% of all American workers will be participating in the gig economy by 2020.

As this segment continues to grow, it will require new savings options suited to these gig workers if they are going to have a real chance at reaching their final gig—retirement.

None of this is to say that 401(k)s are going away. 401(k)s serve an important purpose for the American workers and employers who offer them, and they will continue to do so for a long time to come. But just as defined benefit plans were once the standard bearer for retirement savings before concerns about their costs led to the wide adoption of 401(k)s in the 1980s and 1990s, a new continuum of innovative savings options will be needed to ensure retirement readiness for all types of businesses and workers. This is especially true for gig workers and businesses that are too small for a 401(k).

These changes should be viewed more as an opportunity for visionary retirement providers than as a threat to existing, profitable businesses. In order to reimagine our retirement system, companies will need to get creative to raise awareness, increase financial literacy and provide the real education needed to create meaningful solutions to the retirement crisis.

*Note from the editor:

This feature article is to provide general information only, does not constitute legal or tax advice, and cannot be used or substituted for legal or tax advice. Any opinions of the author do not necessarily reflect the stance of PLANADVISER Magazine or Institutional Shareholder Services.