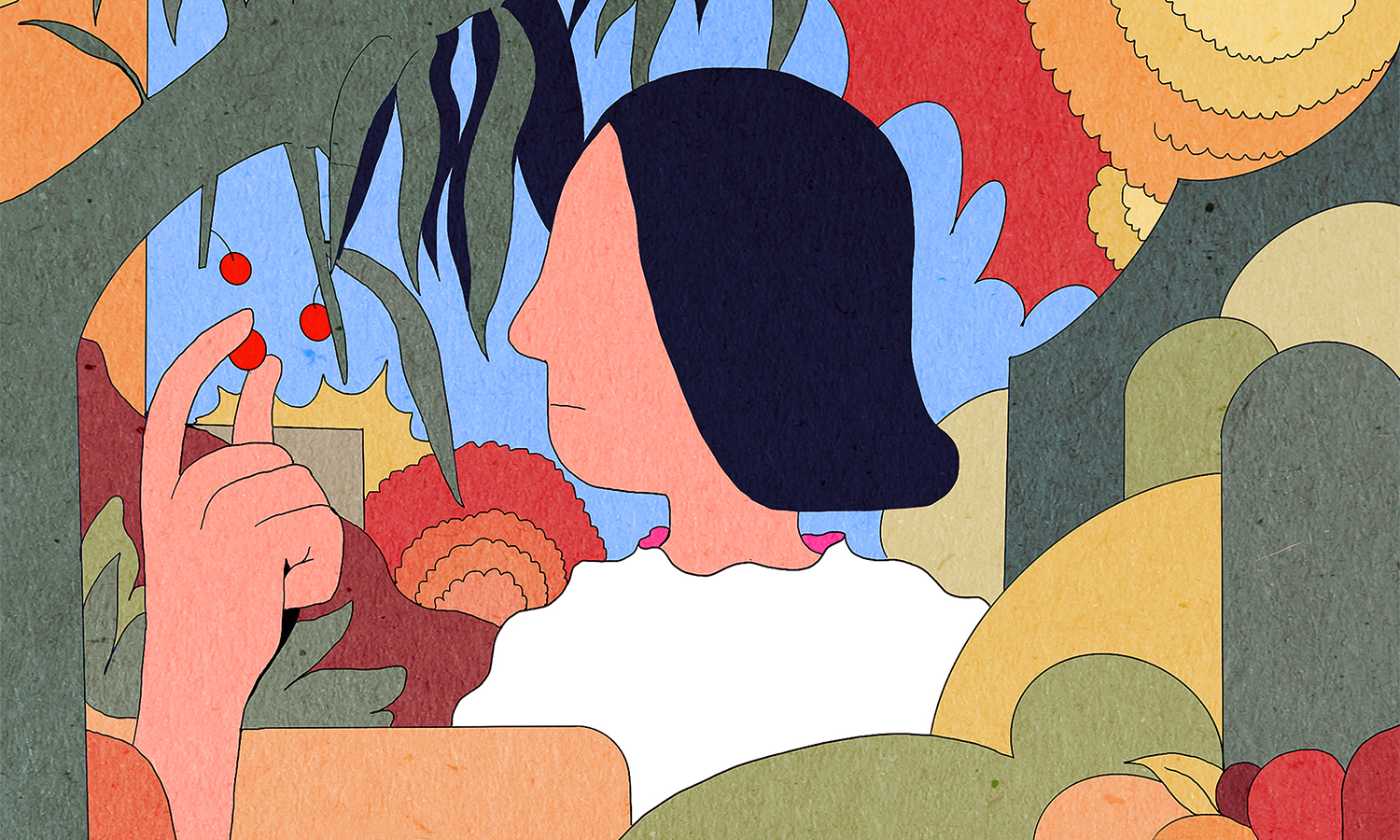 A lot of ink has been spilled maligning the Millennial generation and lamenting their motivation to save for retirement and otherwise plan for the future. For instance, it has been written that Millennials are short-term thinkers who prioritize life experiences over saving for the future. They’re also typically described as budget-conscious consumers who have little loyalty to businesses or brands. And, of course, they’re viewed as lifestyle predators, having “killed” everything from condiments to vacations. 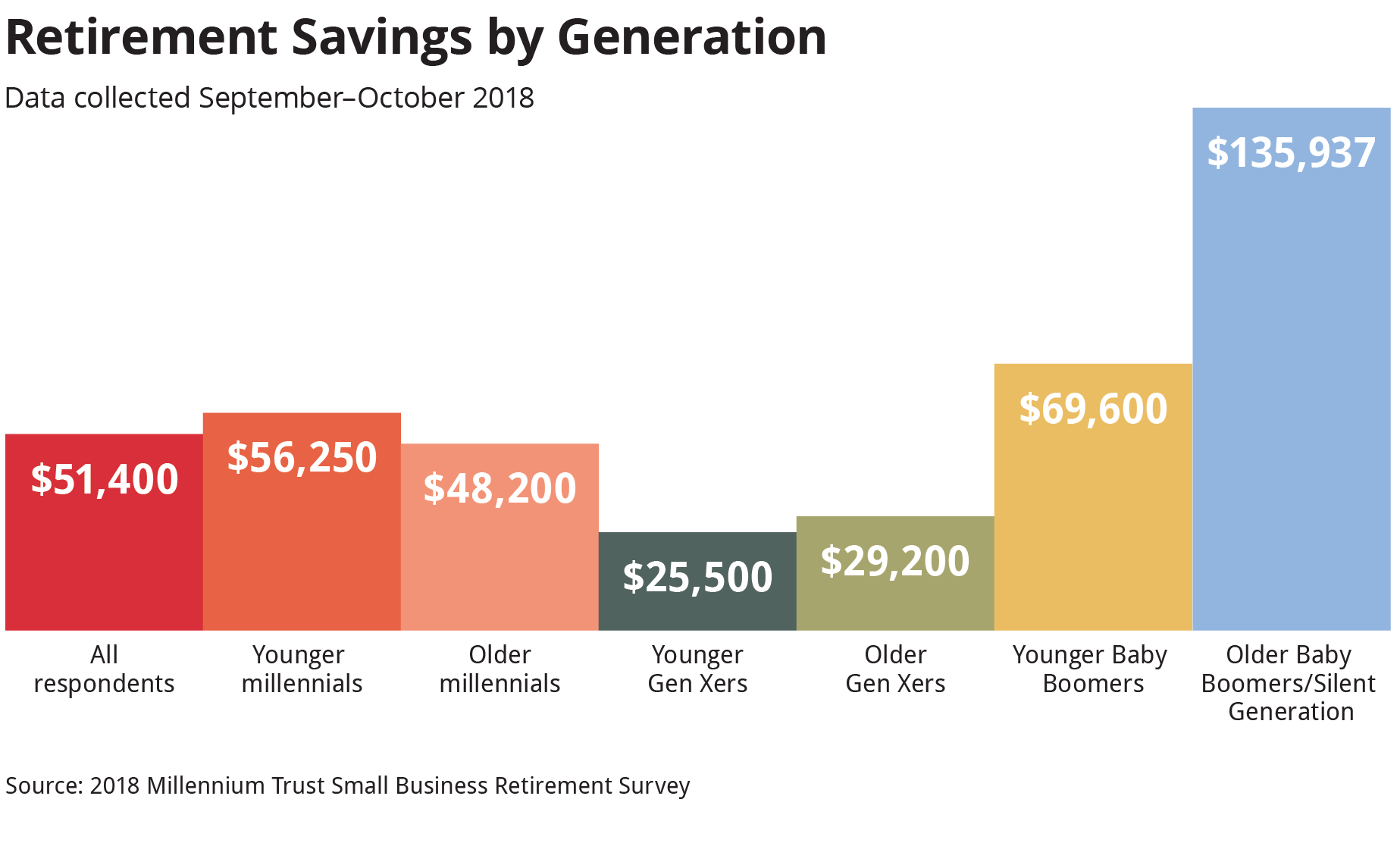 The 2018 Millennium Trust Small Business Retirement Survey found that many Millennials already have accumulated sizable retirement savings, as the chart above shows. On average, Millennials who participated in the survey had saved more than Gen Xers.

It is a good thing Millennials are tucking away tidy sums at an early age. While recent reports from the Employee Benefit Research Institute (EBRI) indicate retirement security in America has improved since 2014, those gains are likely to be lost again in 2034 when the Social Security Trust Fund Reserve may be depleted and benefits reduced by 23%. Consequently, younger Americans may need to save more than earlier generations to secure comfortable retirements due to increased life span and overall increased cost of living.

In the Millennium Trust survey, the majority of respondents—across generations—indicated that having a retirement plan at work would help them save for the future. Not having access to a plan was seen as an obstacle to saving by some Millennials, as was confusion about how much to save. 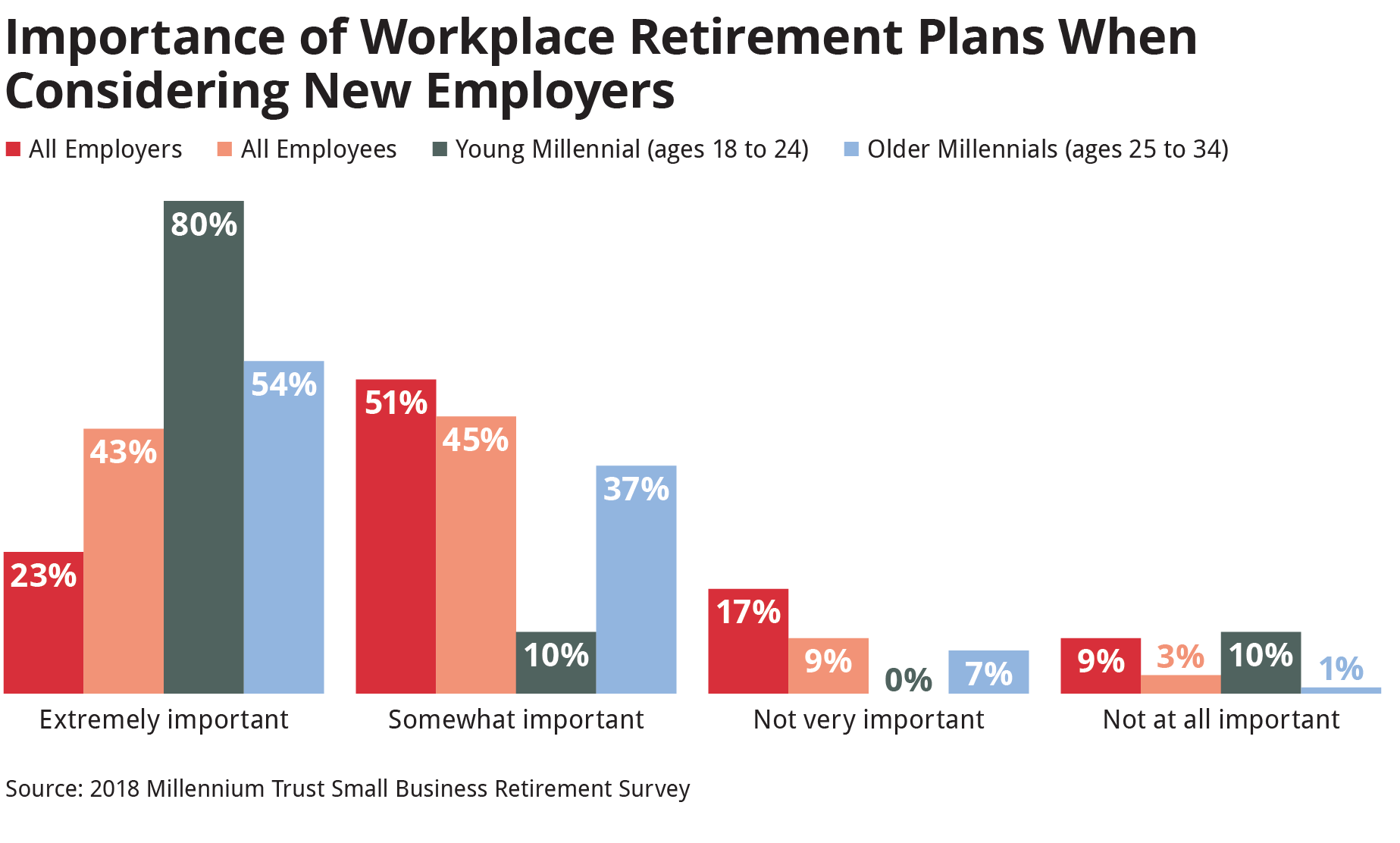 Plan availability appears to be a key to retirement security. No matter how old retirement savers are or how much they have saved, workplace plans can have a significant effect on saving behavior.

How Can Employers Help Millennials Better Prepare for Retirement?

Millennials have become the largest generation in the U.S. workforce. The Pew Charitable Trusts reported that as of 2017, the most recent year for which data are available, 56 million Millennials (those ages 21 to 36 in 2017) were working or looking for work. That was more than the 53 million Generation Xers, who accounted for a third of the labor force. And it was well ahead of the 41 million Baby Boomers, who represented a quarter of the total.

Employers who want to attract younger workers need to adapt their benefits to the needs of a younger, financially-conscious workforce. From the employer perspective, key considerations include:

Employers who fail to offer competitive benefits are likely to find themselves at a disadvantage in a competitive labor market. The needs of Millennials, who comprise the biggest portion of the labor force, are particularly important.

What Does This Mean for Advisers?

As Millennials transition to become a dominant financial force in the American economy, advisers will need to find a way to tailor their services to fit their needs. Some themes advisers should consider as they position their practices for the next 15 years and beyond are the following:

This data points to a lack of understanding among employers related to plans designed specifically for small business, like SEP, SIMPLE and payroll deduction IRAs. On the flip side, it also points to a need for better communication of these lower-cost plan options on the part of advisers and other providers.

The Millennial generation is expected to equal or surpass the size of the Baby Boomer generation over the next two decades, and, as such, will come to define our industry’s sales and marketing efforts. The sooner advisers understand that, the better positioned they will be to take advantage of the tremendous, yet misunderstood, opportunity Millennials present.

*Note from the editor:

This feature article is to provide general information only, does not constitute legal or tax advice, and cannot be used or substituted for legal or tax advice. Any opinions of the author do not necessarily reflect the stance of PLANADVISER Magazine or Institutional Shareholder Services.