Specifically, for the companies surveyed, plans with more participants and higher average account balances typically had lower all-in fees, benefitting from economies of scale by spreading fixed administrative costs over more assets and participants. In addition, plans with higher allocations to diversified equity holdings tended to have higher all-in fees as a percentage of plan assets, consistent with the fact that equity investment options generally have higher expenses than other types of investments.

“Consistent with prior years, this study helps to differentiate the factors that drive fees from a number of other plan features that do not appear to have a significant impact on fees for the companies studied,” explains Scott Parker, a principal with Deloitte Consulting LLP who led the research effort. “It’s notable that the primary drivers of fees continue to be the size of the plan as measured by number of participants and average account balance, as opposed to other features that might be associated with complexity in servicing plans, which did not appear to have a significant effect on fees.”

The study looks at total fees charged across a broad sample of 357 employers, representing 361 DC plans with $1 million or more in plan assets. These plans had a range of plan sizes, service levels, investment offerings, retirement service providers, and fee structures. Using an exclusive survey that gathered data from each of the plans studied, Deloitte researchers calculated an “all-in” fee for each plan. The all-in fee captures administrative, recordkeeping, and investment-related fees—whether paid by the plan sponsor, the participant, or the plan—as a percentage of plan assets. 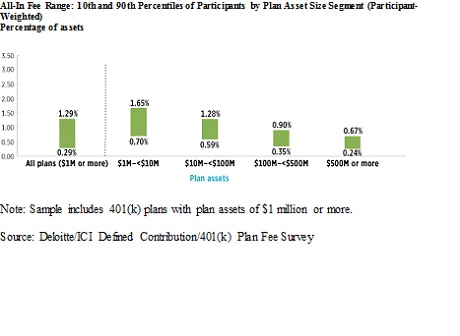 “401(k) and other DC plans represent about one-quarter of Americans’ retirement assets and play a vital role in Americans’ retirement security,” says Sarah Holden, ICI senior director of retirement and investor research. “This study can inform policymakers, employers, plan service providers, and workers about what plans cost and what factors are the key drivers of plan fees.”

The 361 plans were surveyed from June through December 2013, and collectively, the sample covered 2.7 million participants and $240 billion in plan assets.

To better represent the universe of 401(k) plans, survey responses were weighted according to Department of Labor (DOL) data based on plan assets and number of plan participants. Though 87.3% of all 401(k) plans have fewer than 100 participants, large shares of assets (45.5%) and participants (40.9%) are in plans with 10,000 or more participants.

The study report, “Inside the Structure of Defined Contribution/401(k) Plan Fees, 2013,” is here.