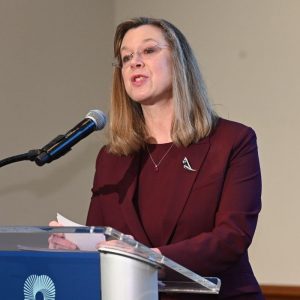 Lori Lucas, the CEO of the Employee Benefit Retirement Institute, plans to retire at the end of the year after almost five years at EBRI, leaving a legacy of increased accessibility and focus on diversity.

Prior to joining EBRI, Lucas had been the executive vice-president for defined contribution practice at Callan Associates, director of research at Aon Hewitt and an analyst at Morningstar.

When she took over in 2018, she explained to PLANADVISER that she wanted to increase the accessibility of the research that EBRI produced. She says EBRI’s work is far more accessible now and cites as examples the various formats in which EBRI publishes its data, such as webinars and interactive infographics.

Lucas explains that prior to being CEO at EBRI, she was a consumer of their research. She knew many members wanted EBRI’s key findings and summaries of research to present to industry executives because, “Not everyone wants to read an entire issue brief.” This insight motivated the increased accessibility of ERBI’s research for its members.

In April 2023, EBRI will release its retirement security projection model, according to Lucas, using 401(k) and IRA data to project likely retirement outcomes for different cohorts of the population. The model can also be tweaked to account for the different retirement provisions in the SECURE 2.0 legislation. Lucas says there is currently a $3.6 trillion deficit from what American workers aged 35 to 65 should have saved for retirement, and this model will measure how each provision could reduce that deficit.

Also due in the spring is the EBRI Retirement Confidence Survey. 2023’s survey will focus on the retirement confidence of caregivers, says Lucas. Caregivers, such as stay-at-home parents, work full-time and socially valuable jobs but are unpaid and do not enjoy the benefits of accessing an employer-sponsored retirement plan in their own names. As a result, they are especially vulnerable in retirement if they divorce or if their partner dies.

In her time at EBRI, Lucas says that perhaps the biggest change in the industry is the new focus on overall financial wellness of employees: “Retirement is no longer the sole focus of employers.” Future financial wellness must be paired with current financial stability, and employers are seeing that more and more. She specifically cites student loan assistance and emergency savings as items that both address short-term financial security and make long-term saving more feasible, both of which are also items addressed in the pending SECURE 2.0 legislative package.

Lucas is especially proud of the Diversity, Equity and Inclusion Council started at EBRI last year and EBRI’s related research on the financial wellness of women and minorities. One point she highlights is the importance of plan sponsors using different messaging with different demographic groups. She says the messenger’s background can affect how a message is received by different demographic groups and that multiple-choice questions given on surveys should account for different cultural perspectives so that the questions resonate and yield accurate responses.

As an example, Lucas explains that providing “prioritizing family over self” as an option when asking about barriers to retirement savings was particularly resonant with black and Hispanic respondents in EBRI’s data.

Lucas will now turn to writing, a longtime passion. She says she wants to write fiction and feels very fortunate she was able to save enough that she can turn from one passion, retirement research, to another, writing, in a financially sustainable way.

She calls her retirement an example of “leaving on a high note.”