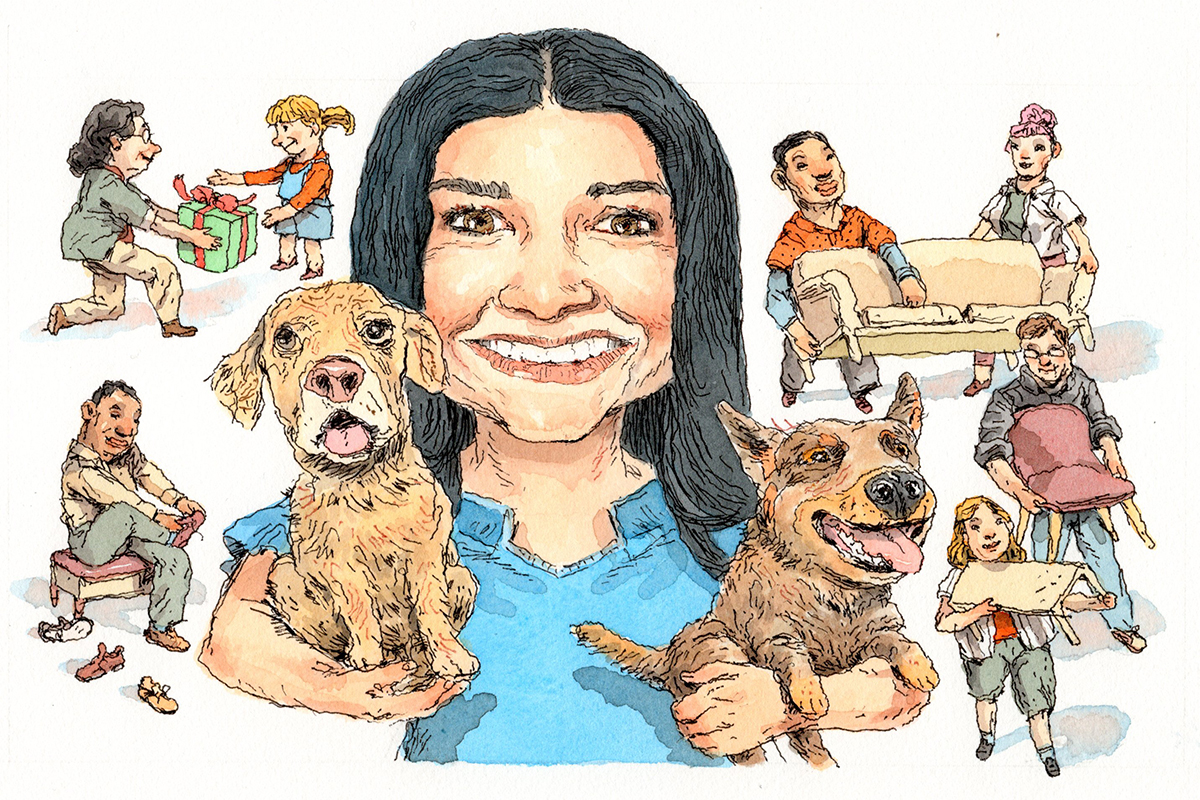 The PLANADVISER Advisers Giving Back profile series offers an inspiring view of the charitable and philanthropic work undertaken by some of the leading advisers in the retirement planning industry.

Some of our profile subjects have been focused on a single cause, such as Brad Arends’ ongoing efforts to bring more affordable and local health care back to Albert Lea, Minnesota, or Jason Chepenik’s work creating the Smarter Tomorrow Foundation, which is on a long-term mission “to give every kid from every community a fair shot at a strong financial future.”

For her part, Renee Scherzer, principal at 401K Resources in Scottsdale, Arizona, is involved in a wide variety of important causes, from anti-bullying advocacy to serving children in crisis and supporting local animal rescue efforts. She tells PLANADVISER that giving back has long been an important part of her identity, though she was not always comfortable talking about it in professional settings.

“Giving back is a part of who I am and where I come from,” Scherzer says, noting that she grew up in a crisis situation and, for that reason, can strongly identify with children, families and animals who are in need. “What I’ve learned as I’ve grown in this business and gotten to know my clients is that they want to work with people who care about giving back to the community.”

Early on, Scherzer says, she did not know how to talk about her giving efforts or how to integrate giving back into her business identity. That has since changed.

“It took time for me to realize that this should be a part of my professional life and that I should talk to my clients and colleagues about the work I’m doing to give back,” she says. “Today, this is a big part of my relationship with my colleagues and clients, and I am so glad that is the case.”

These days, Scherzer says she gets text messages from clients over the weekends, telling her they are out rescuing animals or doing other things to give back. She has had clients show up to meetings with boxes of blankets and clothing for the homeless, or with food and dog beds for the local shelter.

“The thing to realize is that everyone wants to give and they really appreciate when someone takes the lead and gives them an opportunity to get involved themselves,” Scherzer says.

These days, Scherzer’s giving work extends across an array of well-deserving organizations, including her local animal rescue organization and an organization that is dedicated to helping children in crisis. She helps these groups by doing everything from driving to the grocery store to pick up food in bulk to helping organize clothing drives and fundraisers. Once, when a charity kickball game got rained out, she invited everyone to her own home instead to have a karaoke night—which met and exceed its fundraising goals.

“Some of my favorite giving opportunities have involved serving families ahead of the winter holidays,” Scherzer says. “One year, we literally filled two truckloads of gifts and walked down the streets of an underprivileged neighborhood with a local advocate, knocking on doors and giving out bags of toys. Another time, we helped to furnish and fill an apartment for a family of seven that had answered an ad my friend had posted, offering a free couch on Craigslist. You never know where you are going to be needed.”

Scherzer says anti-bullying efforts have also been important to her charitable efforts.

“Speaking at events against bullying is a big part of my story as well,” Scherzer says. “I’ll tell you that story. My middle child was bullied terribly in the fourth grade. Frankly, we were unable to get through the issue with the school and the other parents. It was really frustrating, and in the end we decided to leave that school, and we are blessed to have been able to do that. In the end, it was so rewarding for us to see how our efforts to be vocal about this critical issue attracted other people who are going through similar things—and there are so many. Eventually, I was invited to go on podcasts and speak with big groups of people going through similar challenges.”

Scherzer says she got “amazing feedback” during that process from both clients and colleagues.

“It was so meaningful for me and my daughter to share our story,” Scherzer says. “It helped other people to relate to us and helped us to feel less alone in facing what is actually a very common challenge.”

Echoing the other advisers interviewed for the giving back series, Scherzer says the impact of community engagement on her client relationships has been tremendously positive.

“One thing one of my colleagues once told me is that clients want to know that you are the same person when you leave the office as you are when you are interacting with them—that authenticity is so incredibly important,” she says. “When they get a sense that you care about your community, it creates a different level of respect and collaboration. I do think this is a big part of why I don’t lose clients—why I’ve had some clients for over 20 years. It’s a different level of relationship that you can get to.”

Scherzer says it takes the same skills to be a successful adviser as it does to be successful helping other people.

“When you make it known what you are all about and what you do, people trust you and they come to you to get involved,” Scherzer says. “I had another colleague come up to me on the way out of church one time, and he asked if I was still involved in serving children in crisis. I said, ‘Yes,’ and he said he needed to do another donation for the year, and he literally wrote out a $5,000 check right there in the parking lot. That’s the kind of giving from others that we can all inspire, given our respected position in the community as advisers.”

Scherzer says if she could share one tip with advisers considering getting involved, it would be to let them know that it is “OK to be inconvenienced once in a while.”

“Everyone is worried about spreading themselves too thin—especially advisers who are already so busy and so involved in so many things,” she says. “To these people, I encourage them to welcome the inconvenience and just try something. Once you see what you gain from getting involved, you immediately stop looking at it as an inconvenience. You have to find where your passion is and where your skills are most needed. Just start with a Google search or asking people you know who are involved already and ask how you can help them. Just look at what your skill sets are and what you can offer to the community.”