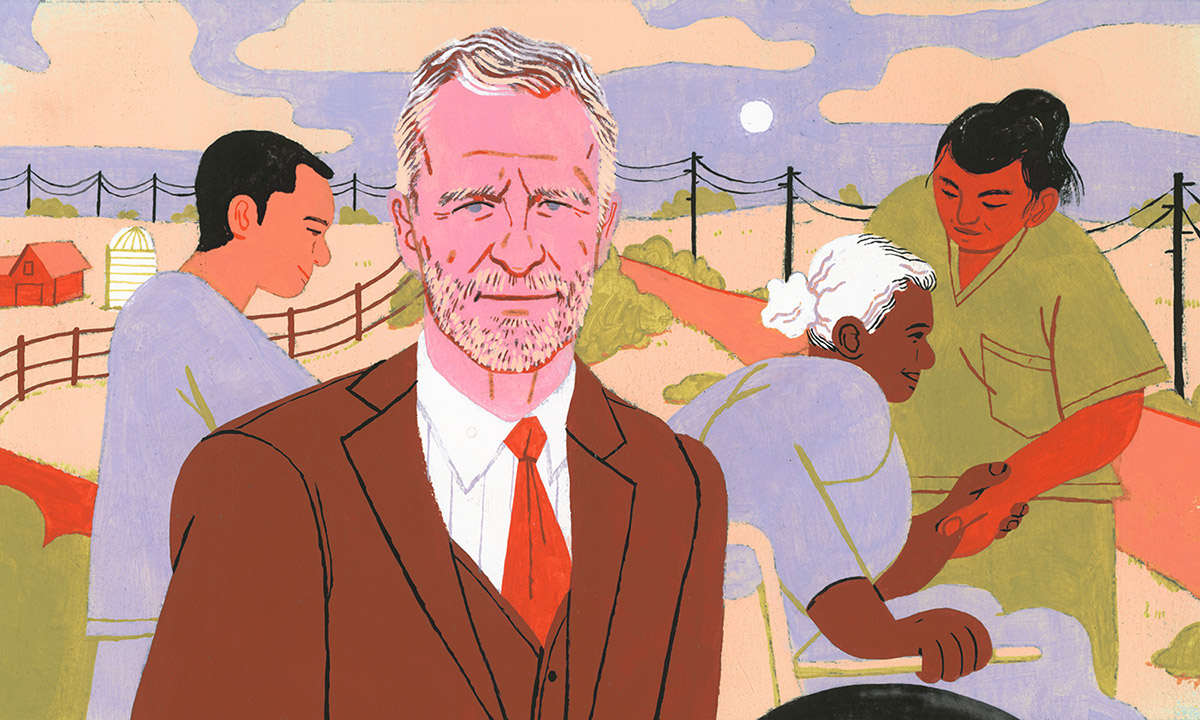 The PLANADVISER Advisers Giving Back profile series has primarily found its subjects through word-of-mouth recommendations made by the peers of advisers and firms that are generous with their time and financial resources.

That is certainly the case with Brad Arends, co-founder and CEO of intellicents, who was recommended by his brother and coworker, Grant Arends. Grant was also a recent profile subject recognized for his inspiring work in Africa. Grant shares high praise for his brother’s work improving access to affordable health care for a small southern Minnesota community, and so do others in Albert Lea, Minnesota, as Brad Arends was named by the Albert Lea Citizen of the Year Committee as Citizen of the Year for 2020.

The recognition is tied to a yearslong effort Arends has led to bring more affordable and local health care back to Albert Lea.

“Honestly, this whole thing was forced upon me,” Arends tells PLANADVISER. “We are located here in a small town in southern Minnesota that has about 18,000 people. It is the county seat and we are on the border of the state of Iowa—just seven miles from the border. Up until about three years ago, we had proudly been a ‘Mayo town,’ as you will hear people say.”

What Arends mean is that the local hospital system in Albert Lea was acquired some time ago by the Mayo Clinic, and the relationship was strong for years.

“People in our region will know that Mayo has acquired the vast majority of hospitals in our area,” Arends explains. “We waved the Mayo flag here in Albert Lea until three years ago, when they announced they would have to dramatically reduce services in our local hospital. Frankly, it was such a cutback planned that we only have a hospital in name, in our view, in the community’s view. They got rid of all overnight hospital beds, all labor and delivery, the intensive care unit [ICU] and more.”

For its part, Mayo says it needed to move the services to stop the local hospital from hemorrhaging money. Arends says he and others in the community understand that motivation, but that the outcome of requiring people in the local community to commute significant distances to other Mayo health care resources was just not an outcome they could accept.

“How viable is a community from a health care and economic perspective if it doesn’t have these services?” he asks. “Mayo told us that they would be doing this transition over a three-year time period, and it was just very distressing for everyone here. When I say this whole thing was forced on me, I mean that I was recruited basically to unite and organize several citizen action groups’ efforts to save our health care. I felt it was my duty to give back to the community to chair this effort.”

That happened three years ago as of early June, and Arends has been quite busy ever since helping to lead this effort in addition to his day job at intellicents.

“We successfully united three different groups and set up basically this joint citizen action group that we have organized more or less like as a business in terms of our core values, our mission statement and goals,” Arends says. “As you might expect, there is a lot of emotion and passion involved here, so having the skillset of knowing how to be that quarterback or middle man is important. They asked me to participate for that very reason, I think, and because I had been involved in the community in the past as a business leader.”

Offering some advice to peers that may one day be asked to do similar things, Arends says it is critical to go in with eyes wide open.

“I will tell you that I came on conditionally and I required that I could have a co-chair whom I get to select,” Arends says. “I knew this was going to be a big undertaking and that it would not just be a matter of a few weeks or a few nights out of the year. This is a huge mission we have taken on and we cannot fail. For example, I knew from the beginning that we would likely have to look past Mayo and create our own solution. Don’t get me wrong, Mayo is probably the top health care brand in the world. They provide absolutely amazing services, but the cost and the consolidation was just too much for us to accept.”

With Arends’ leadership, the citizen action group came up with an alternative that would involve establishing an entirely new health care provider in Albert Lea.

“We had to unite the community to do this, including the citizens, the city, the county and the business community,” Arends says. “Where are we today? We’ve made tremendous progress, but we have a long way to go as well.”

Using money raised from the community, the citizen action group first hired outside experts to analyze whether another provider could even feasibly come in and serve an anticipated annual patient load of 60,000 people without losing unacceptable amounts of money. The answer was yes—though it would not be an easy matter.

“From that point, we got a business plan in place and then set up a five-step process that would start with a full service acute care clinic in town and eventually get us to the point where we could provide outpatient surgery in a hospital setting,” Arends says. “We did an RFP [request for proposals] to see who would or could own this and staff this. It wasn’t possible for the city or the county to own it and run it, so we had to look at a number of alternative providers. We had a whole subcommittee dedicated to this review.”

Arends was able to put his own expertise to work during this effort.

“My day job, of course, is to be an adviser in the 401(k) space, but we have actually been dealing with other benefits since the 1980s,” Arends says. “We’ve consulted on all types of benefits and health insurance, so I had the necessary background expertise and I’ve really benefited from that. I could understand the quality and cost issues that really drive this marketplace and which would determine whether or not this effort could work.”

Where do things stand today? Right now, this effort, like many other things, has been delayed—but not derailed—by the coronavirus pandemic.

“At this point, we have hired a health care attorney to help us establish a public charity under a new brand of the Albert Lea Healthcare Coalition,” Arends says. “That happened around Christmastime and it allowed us to go out and start raising the real money to go out and buy the building, contract with health care providers to staff and run the practice—to take all those steps towards achieving our ultimate goal of being able to provide outpatient surgery.”

So far, the group has raised nearly $4 million in total, $1 million of which came from one wealthy graduate of Albert Lea High School. As of late June, the group has purchased the required real estate and it has contracted with a health care entity in northern Iowa to staff and run the facility once it is built.

“Right now we are supposed to be two months into construction, but that has obviously been delayed,” Arends says. “We have the blueprints and even had the contractors internally selected for our five-step plan to begin. Then the coronavirus crash happened, and the health care entity’s parent organization put a freeze on all capital expenditure projects. So, right now, we’re targeting an October start for construction. We’ll have to go out to bid again and repeat some of the work we’ve done, but we’re optimistic. The health care provider hasn’t pulled out, which is just amazing. It’s conceivable we’ll be up and running by April 2021.”

Though the work has been anything but easy, Arends says it has been incredibly meaningful, and he encourages his peers to make the effort to give back in whatever way they feel most empowered.

“I can tell you as a person who has long been active in volunteer work that this has been the most fulfilling project I’ve worked on,” he concludes. “Health care impacts everyone. What also has been so gratifying is seeing a new crop of future leaders emerge from this effort. I see myself from 20 years ago in some of these folks who have stepped up to help. They are people in the business community that had not been active in the past but who have now found their voice. I’m so inspired to see them stepping up and I no longer worry about a lack of future leaders.”
Tagged: Advisers Giving Back