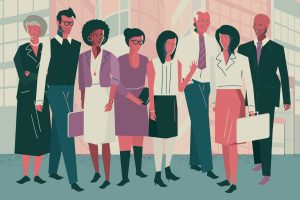 While the retirement plan industry has long been dominated by white men, that could soon change, thanks to the efforts of firms such as J.P. Morgan Wealth Management and Northwestern Mutual.

This comes on the heels of its announcement last year that it will spend $30 billion through 2025 to provide economic opportunities to underserved communities, especially Black and Latinx communities. The firm says it will use the money to promote and expand affordable housing and home ownership, to help grow Black- and Latinx-owned businesses and to improve financial health and access to banking in these communities.

To recruit Black advisers, J.P. Morgan will partner with historically Black colleges and universities and promote internal mobility for Black and Latinx people. J.P. Morgan says it will equip candidates for the adviser positions with investment knowledge, mentorship and coaching.

Citing data from the Federal Reserve, J.P. Morgan notes that only 34% of Black families have retirement accounts, compared with 60% of while families, and their median retirement balance is $46,100, compared with $151,000 for white families.

“We want to drive a step change in the representation of financial advisers at J.P. Morgan,” says Kristin Lemkau, chief executive officer of J.P. Morgan U.S. Wealth Management. “We have made progress in recent years, and hiring 300 Black and Latinx advisers will accelerate that progress materially.

In a similar fashion, Northwestern Mutual has made it a point to attract female advisers to its firm and says it’s a key way to grow its business.

Today, 1,100 of Northwestern Mutual’s 7,000 advisers are women, and last year, the number of female advisers it hired jumped by 50%, Botcher notes.

Since only 15% of financial advisers nationally are women, Botcher says she believes recruiting women would benefit all investment firms and advisory practices.

“We know that the majority of women are making the financial decisions in their households and would prefer to work with a female adviser,” she says. “One of the things we have heard from our own female advisers in the field is that one of the impediments to working in this field—and that has kept many women away—is the ability to balance family and an impactful career. It is very difficult for a women to take time off and effectively transition back into the workforce.”

As a result, Northwestern Mutual launched a parental support program in 2019 that includes parental coaching and guidance on returning to the business. “It gives parents support as they leave and come back,” Botcher says. “It also covers their expenses when they are out of the business and their pipeline of referrals may be running dry.”

Northwestern Mutual has also launched a leadership program for women. “We want to show women that there is a great possibility for them to have a fabulous career at Northwestern Mutual and to even enter the leadership ranks,” she says. “The program works with women early in their careers and helps them with baseline leadership development and with advancements. We are really excited about that.”

The firm has also asked its male employees, through its Choice to Champion program, to commit to finding and referring women to the business.

“We love the power of the results we have seen,” Botcher says. “A company can enjoy much greater growth when its employees are diverse. It also helps attract other talent. … It is time for all firms in the business to think about our talent more broadly.

A great example of a female adviser who has been successful in the industry is Janine Moore, co-founder of Peak Financial Group, which was acquired by Hub Retirement and Wealth in 2019. Moore, who started her practice with two other partners, recently spoke during the PLANADVISER “Building Your Practice 2021” virtual conference, on a panel called “Building a Talented Team.”

Moore says that when she graduated from college, there were few jobs available, so she joined the National Guard, where she worked in public relations. Some time later, she attended a job fair at Ohio State University, where she found a management training position at Nationwide.

Moore ended up working in the firm’s 457 division on Nationwide’s customer service. Through her work, she and her team won the deferred compensation plan of the city of Houston. Then Moore joined MassMutual  and found herself working from an office near her home, which she said was very convenient since she was a mother of two at that point and needed to be able to attend her children’s after-school sports and other programs.

Moore also recalls how important it was to have had a mentor at Nationwide “who told me to stand up for myself and not worry about what others say.”

Moore and her two partners were inspired to found Peak when her manager at MassMutual was looking to move her office much further from her home, which, she says, would have interfered with her parenting. As Northwestern Mutual also pointed out, Moore emphasized that flexible schedules are key for female advisers.

Moore says she has been very careful to make Peak a diverse practice.

“We have three women, two Millennials and three [Generation] Xers, including myself,” she says. “We wanted to be sure that all voices are heard and that we become the workforce of the future.”

Moore also attributes much of her success to having joined the Women in Pensions Network (WiPN), where she says she has found some of her best ideas about running her business from like-minded women, some of them who are even her competitors.