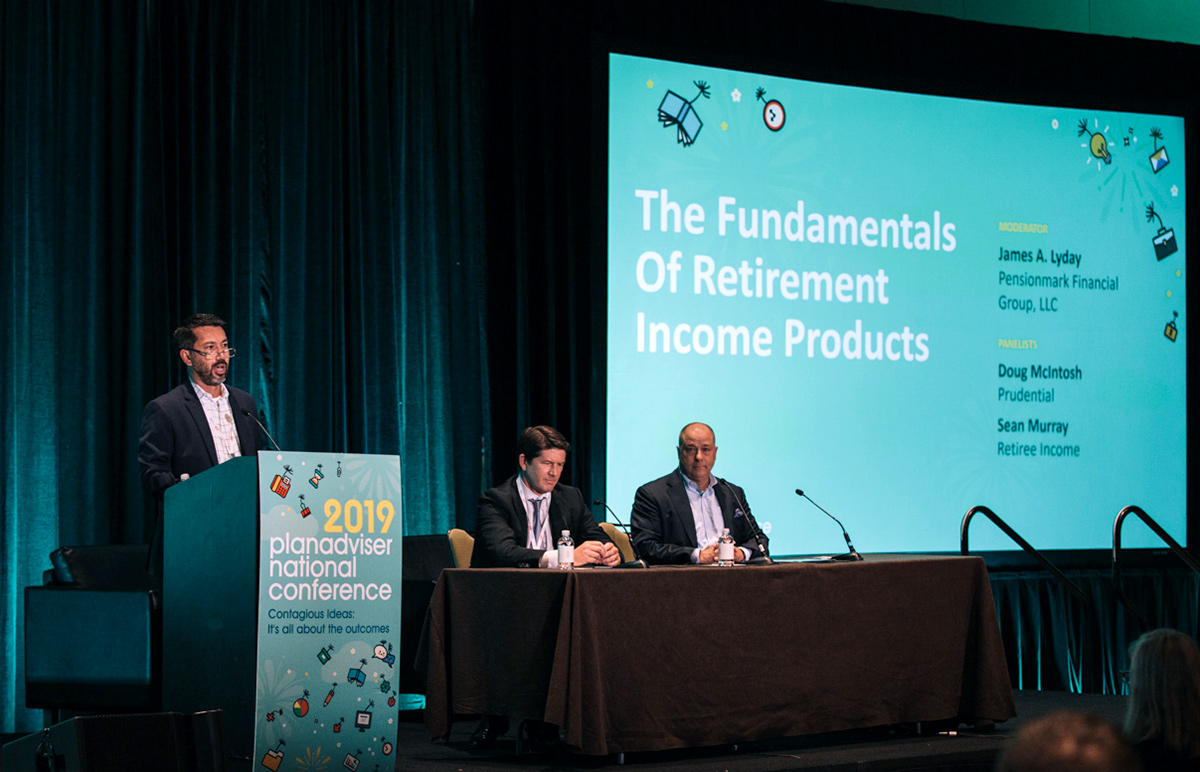 There are three main ways to offer retirement income products in a retirement plan, said James Lyday, managing director of Pensionmark Financial Group and moderator of “The Fundamentals of Retirement Income Products,” a Day Two session at the 2019 PLANADVISER National Conference (PANC). These “are best efforts, fixed annuities and other approaches,” he said.

In the case of best efforts, “This is the work being done by experienced investment professionals to use a nonguaranteed product to deliver income over a set period of time and still leave something behind to beneficiaries,” said Doug McIntosh, vice president, investments, at Prudential. “Fixed annuities, be they immediate or deferred, return guaranteed income to the owner for the rest of [his] life. Should [he] die early, [he] leaves money behind to the beneficiary. There’s a lot of innovation being done with deferred annuities.

“Guaranteed withdrawal benefits are a hybrid type of annuity that guarantees payments for the rest of the owner’s life, but [the person] can back out of the product,” McIntosh continued.

As far as other approaches, these are innovations that “combine all of the above,” he said. “There’s a real market need for guaranteed income, which is why regulations are in favor of innovation.”

Lyday said there are actually 30 different types of retirement income products on the market, with many of the manufacturers being not just insurers but also recordkeepers. “Retirement income solutions are coming to retirement plans,” he said.

As far as the pros and cons regarding in-plan and out-of-plan annuities, the in-plan annuities “layer the guarantees before the market risk and are institutionally priced because of the larger risk pool,” McIntosh said. “But you need to make the plan committee understand what they are, and there is no one solution. Every plan is different.”

With out-of-plan annuities, “the retail market price is not as advantageous,” he added.

Retirement plan advisers also need to inform their sponsor clients “there has been fiduciary protection for sponsors for quite some time,” Lyday said.

“The QDIA [qualified default investment alternative] regulation of 2007 specifically said that the QDIA may embed a guaranteed income element,” McIntosh said. “And in 2008 and 2015, the Department of Labor [DOL] issued safe harbors for sponsors to offer annuities. The SECURE Act will expand on this solid safe harbor already in place. So, you need to know that there is a safe harbor that is fairly comprehensive.”

The SECURE Act would require recordkeepers to translate a participant’s savings and, based on their allocation and deferral rate, project that as lifelong income on their statements, he said. “It also includes a portability provision that would enable the sponsor of an annuity to move from one recordkeeper to another, and its safe harbor would permit sponsors to rely on states’ assessments of the guarantors.”

As far as other challenges and opportunities with guaranteed retirement income, advisers need to realize that people’s biggest fear is outliving their assets, said Sean Murray, principal and chief revenue officer at Retiree Income. To date, the sole focus of defined contribution (DC) plans and those who serve them “has been about accumulation,” Murray said. “We have developed a withdrawal methodology, looking at a household’s entire assets, that makes these assets last seven years longer than they otherwise would. There is technology available to help people draw down assets.”

Retirement income is a topic that advisers will eventually be addressing en masse, Murray predicted. “A lot of plan sponsors have workers who don’t know if they can retire,” he said. “This is a massive issue for many plan sponsors.”
Tagged: Guaranteed income, retirement income products