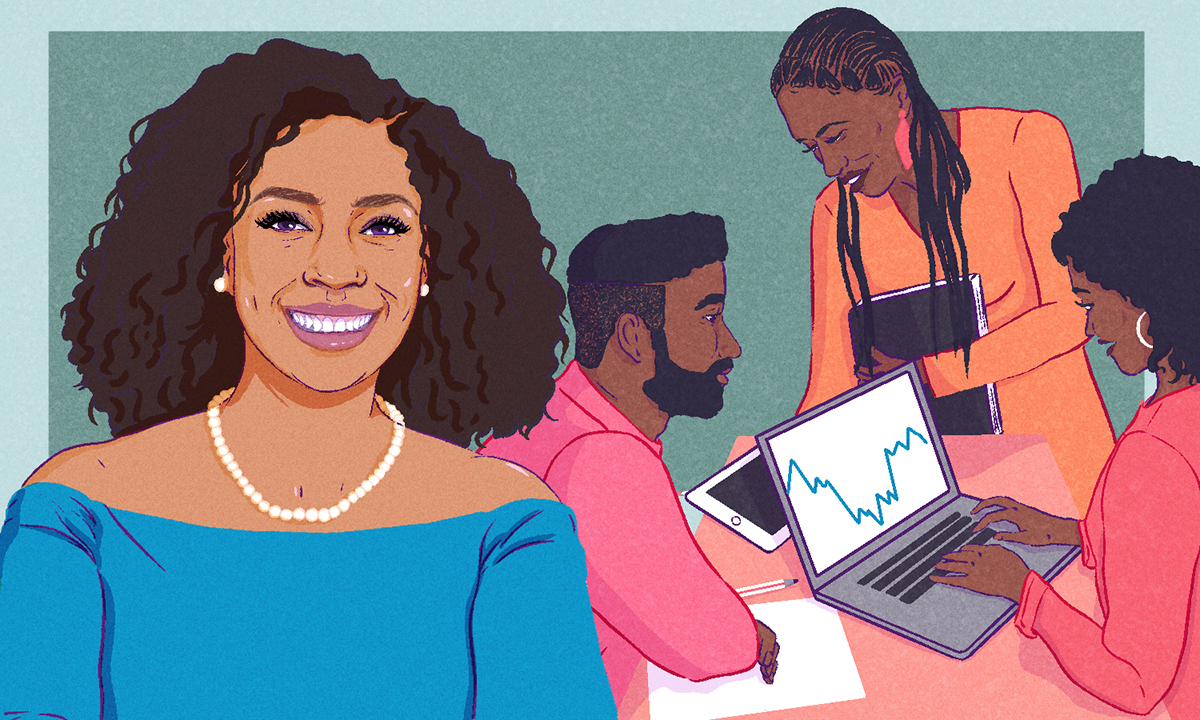 Soraya Morris, a lead trainer at Envestnet | MoneyGuide, based in Richmond, Virginia, became interested in a career in financial services earlier than most people. She says this was a result of her environment growing up and thanks to some well-timed guidance from her grandfather.

“I was interested in the pathway of studying finance and trying to become an investment banker or an adviser from pretty early on, in large part because I was attracted to the opportunity,” Morris says. “I come from a low-income community and area, where a lot of people around me growing up lived paycheck to paycheck. This created my interest in finance, which was then encouraged by my grandfather. He used to go over stocks and bonds in the newspaper with me and explain how they worked—how the markets moved.”

Morris followed her vision and chose to study finance at Virginia Commonwealth University, or VCU, as it is known in the region. While she was in college, she had the chance to intern first with a small fee-only firm. She later secured employment at a much larger fee-only advisory firm that was more focused on high-net-worth clients.

“At the larger firm, they actually assigned you an adviser who would be your formal mentor, and you are basically acting as an associate,” Morris says. “I got to work with another woman adviser and learn from her, which I really appreciated. She had a family and a full work life, and I could see myself in her shoes in the future. I loved that experience.”

Morris says her early connection to the Financial Planning Association (FPA) was also hugely beneficial, as her program director there also acted as a caring and skilled mentor.

In her current role at Envestnet | MoneyGuide, which she has held for about five years, Morris is able to put this mentorship experience directly to work, given that her job is to train and coach advisers about how to use the firm’s practice management technology to the fullest. The work is rewarding and interesting, she says, made more so by the fact that she is a Black woman in a field that lacks in both racial and gender diversity. She also appreciates that Envestnet | MoneyGuide has a progressive and diverse culture.

“It’s been really interesting work after first being an adviser myself,” Morris says. “The vast majority of my experience as a trainer has been positive, and that is because, a lot of time, the people who show up for training are already open-minded to the idea of learning something new and of embracing technology. But, sometimes, yes, people are forced to be there, and I think the way to break through to these people is to draw on my experience working directly with the clients. Advisers will listen to other people who have been there—who know what it is like working with clients. I don’t come at them from an academic perspective. We can relate directly. Even though I am a young Black woman, we can connect based on shared experience.”

Knowing how important mentorship was in her entrance to the industry—and especially the mentorship she received from a successful woman in the field—Morris has been highly active in working with racially and culturally diverse students at VCU. She tends to work with anywhere from one to a small handful of students during a given semester.

“They have a mentoring program where you can be very specific about the student you want to be matched up with,” Morris says. “For me, I have chosen to work with students who are already interested in finance, who are students of color or are otherwise coming from a minority group. I do this because I feel like we have a unique set of experiences and challenges in the industry as people of color. I wanted to let them know they are not alone. I am someone they can talk to when it comes to finding jobs and learning how to be yourself in a corporate environment that is not diverse.”

Speaking to advisers who may not have done any mentoring before, Morris says it can be a flexible experience.

“My tip is that, if this feels important to you, than you should make the commitment to set aside the time and do it,” she says. “Honestly, it doesn’t even have to be a big time commitment. You can let the students guide how much they want to communicate and work with you—because they are busy too, keep in mind. Setting the expectations at the beginning is a good practice. You don’t have to talk every week even, you can check in a few times a month. Let them guide the conversations and meet the needs as they come up. Also, you have to accept that sometimes stuff happens. I’ve had dinner meetings planned and have taken time to drive all the way across town to meet with a mentee, and then the student has forgotten they agreed to meet. These are opportunities for you to make a teachable moment while the stakes are still pretty low. Making challenges teachable is the core of being a mentor.”

For the most part, Morris says, her mentees have few illusions about what it will be like entering the financial services business as a young person of color.

“I would say most of them recognize the issues long before I ever meet with them,” Morris says. “These students are often already in the minority in their finance and economics and accounting classrooms. Even at a diverse school like VCU, that is true. To this day, every room I’m in while I am at work, I tend to be the youngest, and also the only Black person and the only woman in the room.”

Morris wants her mentees to learn as early as possible how to have confidence and to be themselves in such situations—and it’s not easy.

“I try to help them to see that there is a reason they are in that room, they deserve and want to be there,” she concludes. “Even if they feel alone in that space, they aren’t alone. They are supported by people outside, but also the people in that space who believe in them. For advisers who are not Black or from diverse backgrounds, being an ally and advocate is very important.”