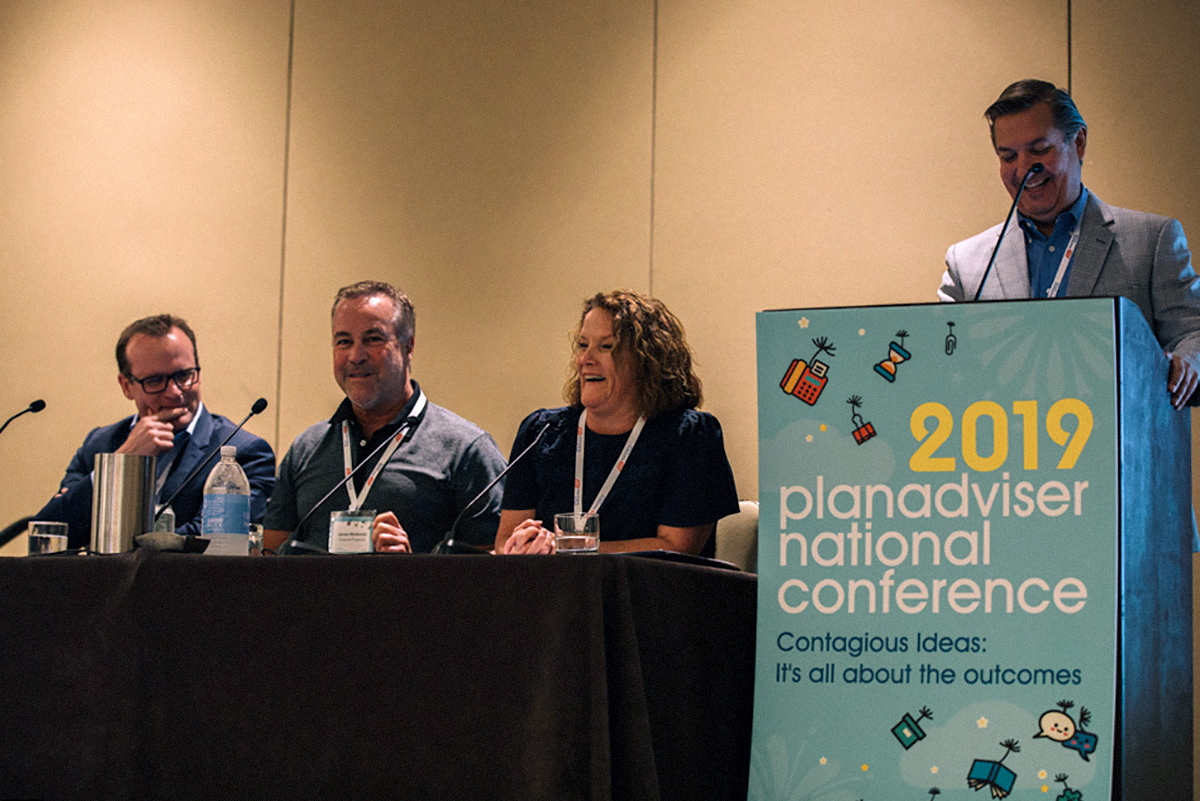 At the “Beyond the Buzzwords: Making ‘Cents’ of Financial Wellness” session, Day Two of the 2019 PLANADVISER National Conference (PANC), Kenneth Forsythe, head of products strategy at Empower Retirement, said, “Financial literacy and education do not work. A true financial wellness program should consist of solutions that help people make progress to better their financial lives and that move the dial.”

In reality, most financial wellness programs are simply education or financial literacy programs that have been renamed, Forsythe said. “A mere one-tenth of 1% of downstream financial behaviors are the result of literacy programs,” he said. Instead, “You need the right set of solutions, nudges and advice models.”

The success of a financial wellness program also hinges critically on its including a financial coach and advice, added Kelli Send, a principal and senior vice president, participant services, with Francis Investment Counsel LLC.

“There are many financial wellness programs out there, but they don’t get used unless they are paired with a coach, accountability for the participant and making the participant confident enough to use them,” agreed Jim McDonald, a partner with Channel Financial. “On January 2, the gym is packed. On February 2, it is empty—unless you have a personal trainer keeping you on track. The same concept applies with a financial coach.”

It is also important to suggest participant goals that seem attainable, Forsythe said. This is why Empower developed a new tool, the Next Step Evaluator, he said. Empower plans on rolling out the tool, now in pilot, to all of its clients by this coming February. “Don’t overwhelm people with the entire path they must take to achieve a financial goal,” he said. “Instead, focus on the very next step they must take, the best use of [their] next dollar. Maybe that’s establishing an emergency savings account.”

The tool will also track users’ achievements, for sponsors and advisers.

To ensure that people actually use a financial wellness tool, Send said, gamify it by building incentives into it such as points earned toward a useful gift or money contributions to their retirement plan.

Incentives definitely work, Forsythe said. A company that is pilot testing the Next Step Evaluator is one of the top 10 retirement plans in the country by assets and employs mostly professionals, he said. This company promised to give every worker who completed the tool $100. “Within 30 days, 78% of this company’s workers had engaged with and completed the tool,” Forsythe said. “It’s amazing what financial incentives can do.”

As to determining a wellness program’s return on investment (ROI) to get a company’s human resources (HR) department or chief financial officer (CFO) to buy into the cost, “it’s easy to track improvements in the retirement plan but harder to measure assets outside of it,” Send said. “That’s why we survey plan participants after every engagement with us. Ninety-seven percent last year said our financial wellness program improved their financial well-being.”

In addition, Francis Investment Counsel has developed a financial wellness score for participants. The average score when the firm started taking the measurement was 60 and is now at 72, which it has reported this back to its plan sponsor clients, she said.

“Justifying the ROI [for a program] to the CFO or C-suite is going to take a while,” McDonald observed. For now, they need to realize “there are many folks working past retirement age,” which should be something of a wake-up call. They also have to know that improving a worker’s financial house makes him more productive and less financially stressed, which affects a company’s bottom line, he said. “We are in the early stages of measurables.”

Advisers should also be cautioned not to overpromise improvements, Forsythe said, noting that the “big promises made for health wellness programs did not come to pass. Some CFOs who have been down that path are skeptical.” For instance, “Don’t position a student loan repayment program as the silver bullet to reduce turnover,” he said. “There are too many other variables at a company, such as its culture. Be careful quantifying it, from a dollar perspective.”

Most financial wellness programs start off at a slow boil, Send said, and their popularity greatly hinges on whether or not a sponsor permits its workers to participate in them during working hours. If it doesn’t, usage typically begins with a mere 5% of the workforce participating, she said. If the employer allows participation “on the clock, within one to two years, there will be 30% participation, and, within three to four years, everyone will be in the program,” she said.

To get the buy-in of the HR director or the committee members, “get them to try it out,” McDonald suggested. “Then they will sell it to everyone else.”

Finally, Forsythe said, “The adviser is an incredibly important part of the financial wellness equation.”

He said he thinks financial wellness is “here to stay,” that, within the next three to five years, financial technology companies will develop applications for the masses and “managed accounts will extend beyond the 401(k). Why not have automated optimization of every dollar?” he said.