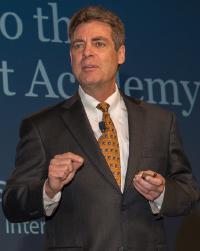 The countdown is on for plan sponsor clients to decide how to respond to the regulatory changes to money-market funds—especially if they have to replace an existing fund in the current lineup. Retirement plan advisers are in a position to help plan sponsors evaluate the role that money-market is playing in a plan lineup and provide guidance to plan fiduciaries about what options are available. As the clock ticks down to the October deadline, PLANADVISER spoke with Randy Fuss of CUNA Mutual Retirement Solutions about the role and opportunity for skilled retirement plan advisers as it relates to money-market reform.

PA: Randy, what is money market reform about?

Randy Fuss: We’re going to have a new set of SEC [Securities and Exchange Commission] regulations take effect on October 14th, after which there will be only three specific structures to money market funds, and also five new rules.

These range from rules covering floating net asset values, redemption fees and redemption gates to new rules governing investment portfolios and fund ownership. Not all five will apply to each of the three structures, but, suffice it to say, the money market landscape will be dramatically different and forever changed.

PA: And what caused this?

Fuss: It actually goes back to 2008—a particular date in September when Reserve Primary Fund, one of the oldest, largest money market funds in the country, broke the buck. In the two days that followed, $150 billion withdrew from money market funds, and, in ensuing days, the Federal Reserve had to step in and prop up the net asset values at a $1 per share price.

The government is still scrutinizing this crisis eight years later, and wants to ensure there are new regulations in place that will limit the chances of falling into a similar liquidity crisis like that again and, thus, another government bailout.

PA: What are the details of the three different structures?

Fuss: Let’s look at it from least amount of change to the most. The least amount of change will clearly be in government funds. They will continue to look, smell and breathe like every money market we’ve known until now, but there’ll be a new rule about the percentage that needs to be in cash, government securities or collateralized by government securities. That percentage will now have to be 99.5%, where, prior, it was only 80%; that one’s fairly straightforward.

It gets a bit more complicated when we discuss the second category, retail prime. One of the bigger changes is that ownership will now be limited to “natural persons,” and defined contribution [DC] plans fall within that definition.

A couple things will remain the same. They will still have a $1 net asset value, and the investment portfolio itself has no restriction to it.

The third category, which is called institutional prime, includes much of what we’ve discussed about retail prime including investment portfolios, redemption fees and redemption gates. But, beyond that, it will now have a floating net asset value, which will trade to four decimal points and likely rarely trade at exactly $1.0000. This category, from an ownership standpoint, can also include federal tax id’s which, as the name implies, also includes institutional clients.

PA: What fiduciary considerations are there?

Fuss: The first is to have a definitive answer as to which of the three new structures the existing money market fund in the fund lineup will take. Most of those announcements have been made, and not surprisingly, the vast majority are going the government route.

For those funds that have declared they aren’t converting to a government structure, there are certainly some lingering considerations: What if a fund’s going the retail route? Will the current recordkeeper even support it? If not, what needs to be done by the plan sponsor? If retail prime will be supported, is there concern about a possible redemption fee or gate? How about the need for immediate communication if a fee or a gate is imposed?

Another fiduciary consideration is about the money market investment itself from a long term performance standpoint. The government category—again, by far the largest going forward—will provide needed stability and liquidity, but at what kind of return? Already yield challenged, there will be hundreds of billions of dollars of new demand for short term government securities which will likely further drive down yields.

If record keepers will support the retail prime category, there may be considerations about needing a minimum yield trade-off for being exposed to the possibility of having the redemption fees and gates. The third category, institutional, is clearly exiting the defined contribution space.

PA: What viable alternatives are there to these money market funds?

Fuss: There are a few. For one, some bank deposit products don’t fall under the money market regulation. Unfortunately there’s probably a similar trade-off in that the yield won’t be much more than 20, 30 basis points [bps].

By far, the most popular alternative to money market funds are stable value funds. Here, you combine the stability and liquidity we typically associate with money market funds but with returns historically more comparable to intermediate-term bond funds. An example is our offering—The Guaranteed Account—which currently pays 2% and has 100% daily liquidity for a participant as well as a guarantee of principal and interest.

PA: Why would a plan sponsor choose alternatives, and why would an adviser recommend them over money market funds?

Fuss: There have been yield challenges for the last six years where, effectively, the money market fund has paid very close to zero. To compound that, we’re starting to see lawsuits pop up concerning a lack of investment return and a lack of access to alternatives. So for the first time there are questions about the suitability of even having money market in a lineup for a qualified retirement plan.

Industry figures are starting to confirm that. The stable value industry, specific to defined contribution plans, is now approaching about $800 billion, whereas money market has been consistently shrinking and now sits around $140 billion.

PA: Post-reform, are there other concerns for keeping money market funds in qualified retirement plans?

Fuss: Unfortunately, there’s another set of waves about to hit, which are some of the developments from the DOL (Department of Labor). One important thing for advisers to keep in mind relates to levelization of compensation needed for plans going forward.

Many existing plans—those served by commission-based advisers—they have a money market fund in the lineup which probably stopped paying 12b-1 fees four or five years ago, so they by nature have an unlevelized plan. When the fiduciary regulations take full effect, in mid to late 2017, those types of plans will no longer be compliant.

As to fee-based advisers—considering that there’s been recent litigation—if the adviser is charging a fee on a plan containing a money market with near-zero yield to it, this is to the detriment of what’s supposed to be participants’ liquid safe investment.

PA: For advisers wanting more information about money market reform, where can they go?

Fuss: Our sales team can provide support in several areas and has resources to share. We have a white paper we co-authored with Drinker Biddle & Reath LLP and a PowerPoint presentation with more detailed information about what we discussed today. As to stable value, we have substantial information about our product, The Guaranteed Account, and about stable value in general.

Randy Fuss is a Practice Management Coach with CUNA Mutual Retirement Solutions and helps advisors in the qualified retirement plan space take their practices to the next level. Randy regularly conducts trainings, workshops and seminars on a variety of retirement plan topics and is a frequent guest speaker to various trade groups and broker dealer conferences.

Securities distributed by CUNA Brokerage Services, Inc. (CBSI), member FINRA/SIPC, a registered broker/dealer, 2000 Heritage Way, Waverly, Iowa 50677, toll-free 866.512.6109. Non-deposit investment and insurance products are not federally insured, involve investment risk, may lose value, and are not obligations of or guaranteed by the financial institution. Representatives offer retirement and investment education but do not provide investment, legal or tax advice. Participants are encouraged to consult their own advisors.